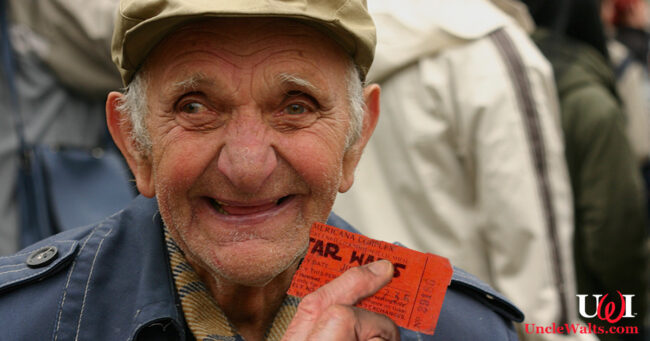 The only other known viewer passed away last month.

SOUTHFIELD, MI — Clarence Farley gets a far-away look in his eye when he talks about Star Wars.

The 102-year-old lifelong resident of Southfield, Michigan, a Detroit suburb, is the last known person still living to have seen the original Star Wars movie in a theater during the year of its release, 1977.

“That was something special, let me tell you,” Farley told Uncle Walt’s Insider. “To see that huge star destroyer passing overhead — on a big screen, mind you, 70-millimeter projector, too — that is a memory I treasure. It’s a pity that I’m the only one left who experienced it that way.”

Farley, we found, will bend your ears for hours talking about those “three great Star Wars movies.” We started to ask him about the prequels and the more recent movies, but his nurse, Gwendolyn, interrupted and urgently asked to speak with us in private.

“At the request of the family, we do not talk about the prequels,” she said. “He doesn’t know about them. And he’s happier that way. [Ed.: Wouldn’t we all be?] Also, while you are in his presence, there was only one Matrix movie ever made.”

While the passing of everyone else who saw Star Wars in theaters is sad, Uncle Walt’s Insider congratulates Mr. Farley on his accomplishment.

How many are left that saw Empire Strikes Back, we wonder? Let us know in the comments below!

Cover photo: Clarence Farley, 102, the last surviving person to have seen Star Wars in a theater in 1977. Photo by Marg [CC BY 2.0] via Wikimedia, modified.

November 23, 2020 by Marty in Other
© 2020 Uncle Walt's Insider. All rights reserved. All images used with permission. Unless otherwise attributed, all images licensed under Creative Commons CC0 license. This site is protected by reCAPTCHA and the Google Privacy Policy and Terms of Service apply.