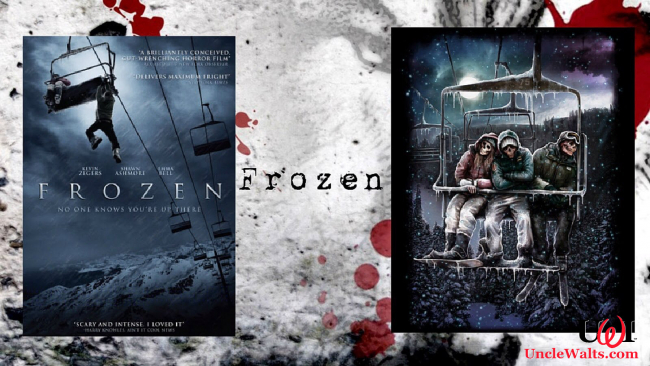 This version has no singing snowman.

ARVADA, CO — A Labor Day visit to their grandparents’ house turned traumatic for Ben Skyler, 7, and his 5-year-old sister Ariana, when their grandmother showed them the wrong movie.

“My daughter and son-in-law had given us this Apple TV thing last Christmas,” says Betty Kijek, the kids’ maternal grandmother. “I still haven’t figured out why they named it after fruit, but I was happy to just leave it on the Weather Channel all the time. Except, of course, when my stories are on.

“Anyway, when my daughter dropped off Ben Jr. and Ariana on Monday so she and Ben, that’s her husband, Ben Sr., could go take advantage of all the Labor Day sales, she showed me again that I could rent movies and show them ‘on the mand,’ or something like that.”

“So after the kids had worn themselves and me out playing in the yard,” Kijek continues, “I asked them if they wanted to watch a movie. Both of them yelled out, Frozen! So I followed the steps Liz, that’s my daughter, showed me. It took me a while to type in ‘Frozen’ — but when I did, the movie was right there! I clicked the ‘Rent’ button thingy and it started playing. And I went upstairs to do some cleaning.”

As it turns out, Kijek had actually rented a 2010 thriller called “Frozen,” not the 2013 Disney animated musical of the same name. The 2010 movie features three friends fighting the cold and wolves for survival after being stranded on a ski lift.

“When I got back downstairs, little Ben was just staring at the screen in shock. I didn’t see Ariana at first, but I found her eventually behind the couch. Crying.”

Kijek herself was shocked to see the gruesome images on the television and shut it off immediately.

“Poor Ben hasn’t said a word since Monday, and Ariana has been sleeping with her mom and dad. I’m just stunned Disney would make a movie like that for kids. I intend to send a strongly worded letter to both them and the Fruit TV people.

“I’m sure the kids, they’ll get over it. And I plan to make it up to them once we get a good snow. Don’t tell them, but we’ve signed them up for ski lessons!”

What do you think? Would you, like us, want to see a mashup of the two movies? Comment below!

September 5, 2018 by Marty in Other
© 2020 Uncle Walt's Insider. All rights reserved. All images used with permission. Unless otherwise attributed, all images licensed under Creative Commons CC0 license. This site is protected by reCAPTCHA and the Google Privacy Policy and Terms of Service apply.