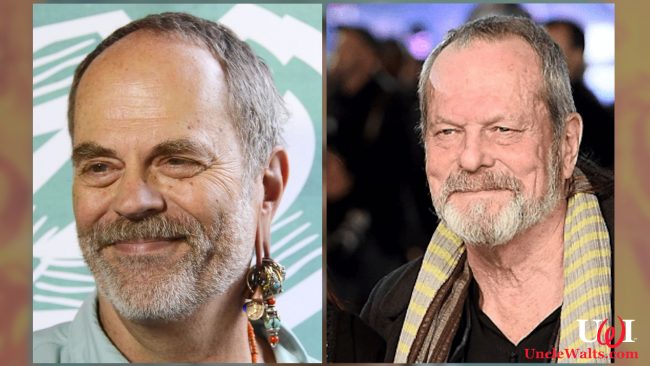 It’s like Superman and Clark Kent, but with an earring instead of glasses.

BURBANK, CA — You heard it here first! Based on our exhaustive investigative reporting, Uncle Walt’s Insider can now reveal that famed Disney Imagineer Joe Rohde and celebrated director and member of Monty Python Terry Gilliam are in fact the same person.

This conclusion is based on solid evidence:

That may not seem like a big deal — last we checked there were [really big number; someone research this] Americans. But consider this: of the six members of Monty Python (John Cleese, Terry Jones, Michael Palin, Graham Chapman, Eric Idle, and Terry Gilliam), Gilliam is the only American. This greatly decreases the odds that Joe Rohde is one of the other Monty Python members.

Hey, don’t give us grief about knowing all of their names but not the U.S. population. We memorize important things.

3. a. Rohde works for Disney
b. Disney is considering adding a Brazil pavilion to Epcot
c. Gilliam directed a movie called Brazil.

Coincidence? We think not!

4. We’ve never seen them together.

Seriously, have you ever seen them in the same room together? Let us know in the comments below!

March 18, 2020 by Marty in Other
© 2020 Uncle Walt's Insider. All rights reserved. All images used with permission. Unless otherwise attributed, all images licensed under Creative Commons CC0 license. This site is protected by reCAPTCHA and the Google Privacy Policy and Terms of Service apply.