Infinity War: the Musical closes after half its cast disappears |

Infinity War: the Musical closes after half its cast disappears 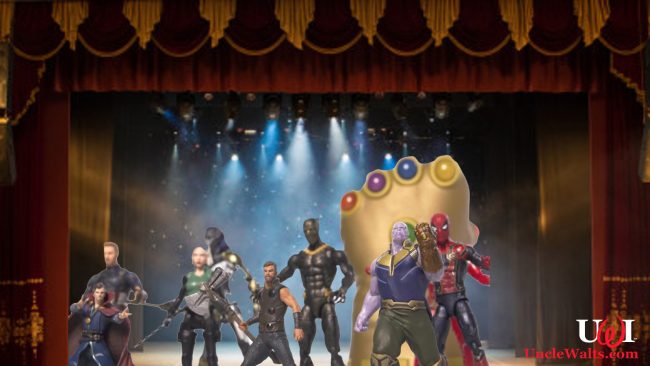 The show closes after one performance in spite of rave reviews.

NEW YORK, NY — It was one of the most highly-anticipated new shows of the 2018 Broadway season and set records for advance ticket sales. But now Avengers: Infinity War: the Musical is closing after only one performance.

Produced by Broadway legend Harold Prince for Disney Theatrical Productions, featuring songs by Benj Pasek and Justin Paul, and a book by Joss Whedon, Stan Lee and Mel Brooks, Infinity Wars was a sure-fire hit — until half its actors disappeared.

“We took some risks on opening night,” producer Prince, 84, tells Uncle Walt’s Insider. “During rehearsals and previews, we’d been using a prop version of Thanos’ gauntlet and relying on special effects. But Joss (Whedon) suggested using the actual gauntlet for opening night. He said it would dazzle the critics.”

Dazzle the critics it did, as the reviews were overwhelmingly positive after the show’s official debut. One writer specifically noted (SPOILERS!) that “the end moment when so many of the characters dissolve into ash was handled so realistically, I still am trying to figure out the stagecraft behind it. And the emotion portrayed on the actors’ faces — both those disappearing and those remaining — looked incredibly genuine!”

The show will stay dark as a decision is made on whether to recast the roles or just close the show permanently.

Does this mean infinity stones are real? Let us know what you think in the comments below!

Cover photo via Shutterstock and news.com.au.

July 24, 2018 by Marty in Other, World
© 2020 Uncle Walt's Insider. All rights reserved. All images used with permission. Unless otherwise attributed, all images licensed under Creative Commons CC0 license. This site is protected by reCAPTCHA and the Google Privacy Policy and Terms of Service apply.