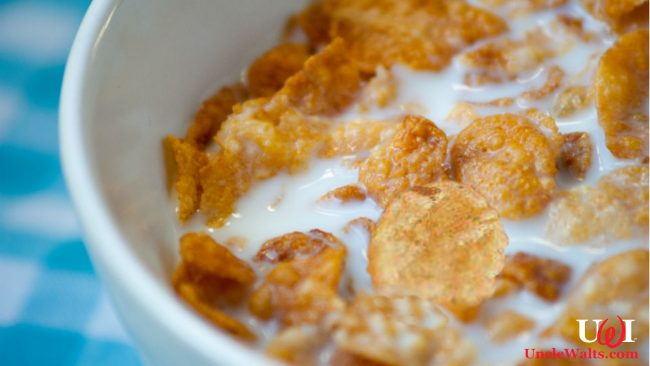 Crowds have gathered to witness the uncommon sighting.

That’s the viewpoint of Bailee McMahon of Escanaba, Michigan. The 36-year-old retail cashier and mother of two teenagers tells her story to Uncle Walt’s Insider:

“I was sitting down to a quick breakfast before heading to my shift. It was a Thursday, so I was having a bowl of corn flakes, eh. I had just been thinking about how great it would be to go back to Walt Disney World when I looked down and there it was, plain as day!”

McMahon had spotted what she describes as a “Hidden Mickey” in her corn flakes. Hidden Mickeys, as most Disney fans know, refer to images of Mickey Mouse subtly placed into architecture or other design elements at Disney properties, and most commonly take the shape of one circle representing Mickey’s head and two smaller circles as his ears.

As soon as McMahon spotted the mousy pattern, she stopped eating, snapped a picture of it (above) and shared it on Instagram and Facebook. Neighbors soon begin knocking on her front door asking to see the phenomenon. In the four days since the Mickey’s discovery, hundreds of people have traveled to Escanaba, some from as far away as Guatemala, and will wait for hours in da moonlight for a chance to see the corn flake pattern.

One such visitor, Willard Andres of Yuma, Arizona, describes the experience of seeing the corn flake Mickey as “transcendent.”

“It was amazing,” Andres shares. “Yeah, the flakes are pretty soggy by now, but it’s definitely Mickey. It’s just good to know that in this troubled world, we can still rely on Mickey Mouse to show up in our cereal bowls.”

As of the time of publication, it was announced that an official delegation from the Burbank conclave is being sent to Michigan to investigate whether the event is actually a miracle.

June 25, 2018 by Marty in Other
© 2020 Uncle Walt's Insider. All rights reserved. All images used with permission. Unless otherwise attributed, all images licensed under Creative Commons CC0 license. This site is protected by reCAPTCHA and the Google Privacy Policy and Terms of Service apply.