Frozen 2 to awkwardly wedge “Let It Go” into plot 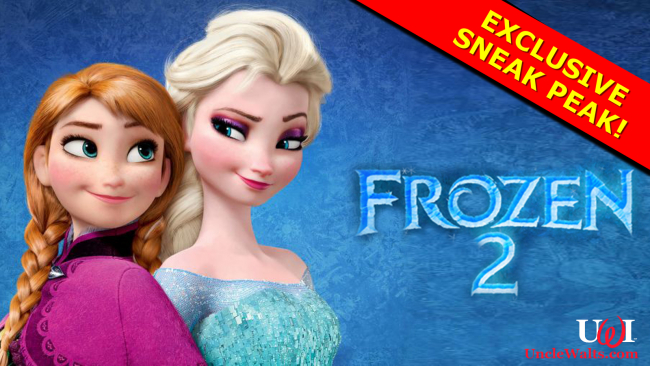 You just knew it was going to be in there somehow.

BURBANK, CA — Time has flown by since Uncle Walt’s Insider first debuted the sneak peak trailer for Frozen 2 almost one year ago. Now we are just weeks away from the release of the film! And of all the many surprises and new music we’ll finally get, one song will not be a surprise at all.

That’s right: Let It Go will feature prominently in the film.

Our source inside Disney Animation Studios, Disney (the company) spokesperson Jun Disney (no relation), tells us that the filmmakers knew the song had to be included.

“We just figured that a lot of tween girls, and not a few early-30’s men, would not be happy if Let It Go weren’t in the film,” Disney (no relation) says. “So our scriptwriters spent literally minutes trying to figure out how to shoehorn it into the story.”

Unofficial reports from those who have seen the film say it’s as awkward as can be. The characters are in the middle of an adventure, fighting off snow giants or something, when one of them says, “Hey, why don’t we sing that song?”

Test audiences (sworn to secrecy, of course) tell Uncle Walt’s that the song’s appearance is a sing-along involving the whole audience. But not by design.

Can you hear Let It Go without singing along? Let us know in the comments below!

Cover photo: The same graphic we used last year for the fake Frozen 2 trailer article, because we’re too cheap and lazy to make a new one. Photo [CC0] via Elaine Smith on Flickr..

October 29, 2019 by Marty in Other
© 2020 Uncle Walt's Insider. All rights reserved. All images used with permission. Unless otherwise attributed, all images licensed under Creative Commons CC0 license. This site is protected by reCAPTCHA and the Google Privacy Policy and Terms of Service apply.