Every state has favorite Marvel character – what’s yours? 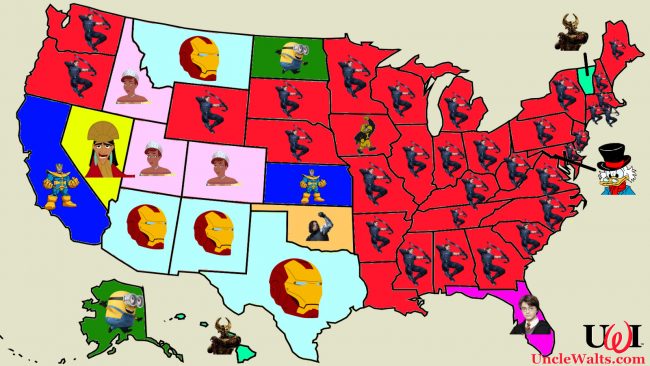 Ever since Iron Man’s stunning popular debut in 1994’s The Marvel Action Hour, fans have devoured one Marvel movie after another, possibly because movie theater popcorn prices are so high. There are now 259 films in the MCU (Marvel C-something U-something), and new Marvel movies are released at the rate of one every 31 minutes.

Of course, every individual Marvel fan is different (sometimes very different), but overall, our research has found that each U.S. state has one overwhelmingly favorite character! Which one is yours?

Here are your favorite Marvel characters by state:

*Our Iowa survey respondents insisted on making “Hawkeye” plural. Not sure what that’s about.

What do you think? Does your favorite character match your state’s? Let us know in the comments!

July 20, 2018 by Marty in Other
© 2020 Uncle Walt's Insider. All rights reserved. All images used with permission. Unless otherwise attributed, all images licensed under Creative Commons CC0 license. This site is protected by reCAPTCHA and the Google Privacy Policy and Terms of Service apply.