DisneyNature will make a live-action version of the Cats musical |

DisneyNature will make a live-action version of the Cats musical 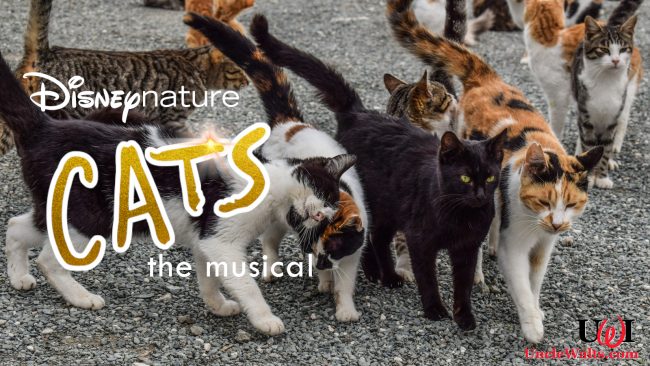 No, not CGI, or humans in costumes. Actual cats.

BR’ER BANK, CA — DisneyNature, the division of Walt Disney Studios that makes those animal movies, has announced its next project: a live action remake of the Broadway musical Cats!
Paul Baribault, president of DisneyNature, is excited about the project. He spoke to Uncle Walt’s Insider by phone.

Straight from the (lion?) king

“This will be something we’ve never done before,” Baribault says.
What, make a movie someone will actually go see, we ask?
“Well, that, yes,” Baribault replies, thankfully ignoring our impudence. “But also, setting our beautifully filmed nature scenes will real animals who also sing and dance!”
So, we ask, real cats, but singing and dancing? How, exactly?
“Well, we’re still working on that. But I’ve been inspired. I recently watched a singing animal movie while in quarantine. If they can do it, I’m sure we can figure it out!”

He had us worried

Singing animal movie? Not… not the Cats film that came out recently?
“Lord, no,” Bearebuilt shoots back. “No no no. No. Just no. Absolutely not. No.”
What then?
“That older singing animal movie. Babe. Has the singing pig, and a trio of singing mice. All real. Plus, the original stage version of Cats so realistically portrayed actual cat behavior, we’re pretty sure we can make this work!”
We were reluctant to tell him that Babe used CGI for the mouths of the animals. But if anyone can figure this out, it’s Disney, right? Thank you Mr. BuildaBear for the interview.
DisneyNature’s Cats: the Musical is set for a release in March 2021.

Will you see this CATS version? Let us know in the comments below!

May 1, 2020 by Marty in Other
© 2020 Uncle Walt's Insider. All rights reserved. All images used with permission. Unless otherwise attributed, all images licensed under Creative Commons CC0 license. This site is protected by reCAPTCHA and the Google Privacy Policy and Terms of Service apply.