Disney Magic to be sunk, turned into artificial reef 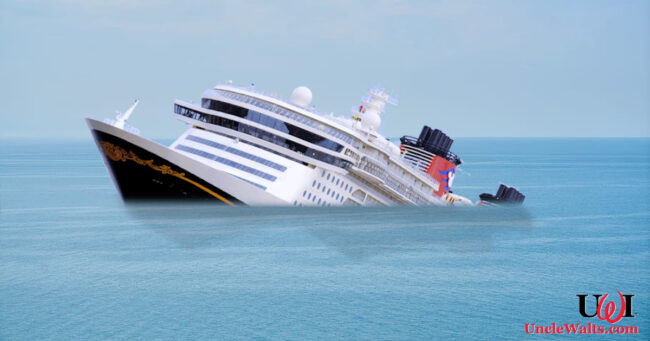 Why don’t they ever sink ships to create natural reefs?

PORT CANAVERAL, FL — The Disney Magic is the latest victim of the Covid-19 shutdown. Disney Cruise Line announced today that the Magic, the first cruise ship in the Disney fleet, will be sunk and turned into an artificial reef.

With the high cost of maintaining the ship during the cruise industry shutdown, the write-off will help boost Disney’s bottom line.

I own a share of Disney. Why don’t I get these calls?

Robert “Bob” Chapek, CEO, and talking head for Robert “Bob” Iger, CEO (the one who actually does things for Disney), made the announcement during a call with investors.

“Keeping up a cruise ship that is not taking on passengers is expensive. For, example, there is still a crew onboard the ship. Don’t worry, I’m pretty sure we’ll evacuate them before we sink the darned thing. We’ll run the numbers again on that to make sure it makes sense.

“While some are concerned about the future of Disney Cruise Line, this (sinking) is actually going to make us money. First, Disney fans will buy anything. Anything! So we’re selling off anything we can, starting with stuff that could harm the environment, like oil, grease, fuel, etc. And as we take things other things off the ship, we’ll sell them, too.”

Milking it for more

One of the Bobs was certain that Disney would find more ways to make the scuttling of the Disney Magic profitable.

“Universal has paid us a ton for ‘first shot’ rights,” Bob explains. “That means they will get to take the first shots at sinking the ship. They get great footage, and we get paid. We’ve already got the boys in marketing working on various scenarios and how we’ll spin it.”

The position of the new reef has yet to be determined. Disney has shared a list of potential locations, however. They are, in particular order:

Did Carole Baskin kill her husband? Let us know in the comments below!

June 2, 2020 by Walt in Florida, Other
© 2020 Uncle Walt's Insider. All rights reserved. All images used with permission. Unless otherwise attributed, all images licensed under Creative Commons CC0 license. This site is protected by reCAPTCHA and the Google Privacy Policy and Terms of Service apply.