Epcot’s “Windows on the World” to be sponsored by Microsoft 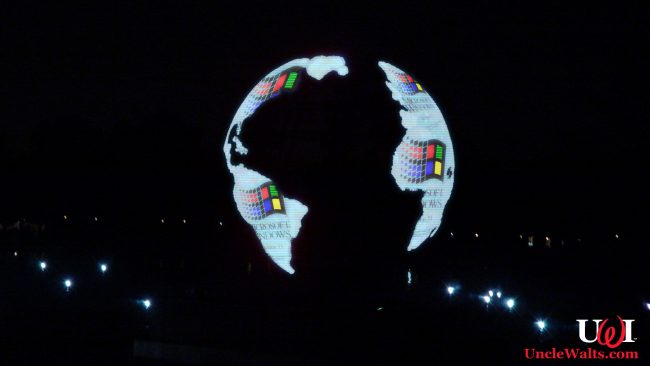 The new nighttime fireworks show will be powered by Internet Explorer.

WALT DISNEY WORLD, FL — News outlets and Disney fan sites alike have been abuzz with the news that the EPCOT Center Resort and Spa will be getting a new nighttime fireworks show. The spectacle, which will replace Illuminations, will be titled “Windows on the World.” However, only Uncle Walt’s Insider has this exclusive information:

“Windows on the World” will be sponsored by Microsoft.

The new show will once again feature Illumination’s spinning video globe — but this time the globe will showcase the Windows operating system, Internet Explorer browser, Bing search engine, and other Microsoft products. According to show notes your correspondent discovered on a table at the Electric Umbrella when a couple of Imagineers got up to make a condiment run, the nighttime event will “highlight the many ways Microsoft Windows has enriched the lives of people throughout the world.”

The release date of the new show has not yet been announced due to “technical delays.” Uncle Walt’s has learned that the primary obstacle so far is that the video globe currently runs on Windows 3.1, and they cannot update it until they locate both the stack of floppy disks used to install it, and a computer that reads floppy disks.

Can you read floppy disks? Let us know in the comments! Ub left some labeled “Private” lying around the office and we’re curious.

Cover photo of Illuminations: Windows on the World by I, Fredhsu [CC-BY-SA-3.0] via Wikimedia Commons & Abel Cheung [CC BY-SA 2.0] via Flickr.

June 12, 2018 by Marty in Florida
© 2020 Uncle Walt's Insider. All rights reserved. All images used with permission. Unless otherwise attributed, all images licensed under Creative Commons CC0 license. This site is protected by reCAPTCHA and the Google Privacy Policy and Terms of Service apply.