Wow: we’ve been spelling “Walt” wrong all this time! 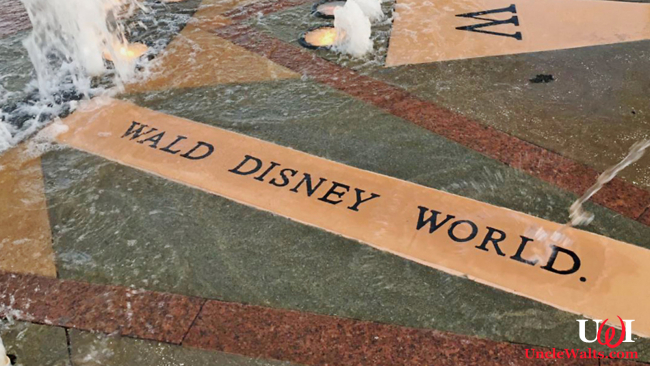 Disney to rename WDW to “Wald Disney World”;  Disneyland will have “Walk in Wald’s Footsteps” tour.

CELEBRATION, FL — If you haven’t seen the image above already, a new fountain in the town of Celebration, Florida, includes a pointer to “Wald Disney World.” Embarrassed officials at the Disney Company now admit that they’ve been misspelling the name of the company’s founder for decades.

“To be fair, Wald did have sloppy handwriting,” says Disney (the company) spokesperson Jun Disney (no relation). “Higher-ups in the company have actually known of the goof for some time, but they’ve tried to hush it up. Apparently the fountain builder knew his true name and put it there.”

Disney (no relation) says that now that the truth is out, the Disney (the company) company will be correcting the spelling wherever it appears.

“Yes, Walt Disney World will now officially be Wald Disney World. We’ll be correcting all the signs, websites, company history, everything. It’ll take some work, but it’s better than just changing one fountain and continuing the lie. It’s the least we can do to honor the vision and legacy of Walder Elius Disney.

“Oh, and my first name is actually ‘June,’ since we’re coming clean. You’ve had it wrong all this time.”

Watch this website, also, as we rebrand over the next week or two as “Uncle Wald’s Insiter.”

Is this the right call? What would Wald do? Let us know in the comments below!

Cover photo: The true spelling of Wald Disney’s name. Photo by baynews9.com, via @NewsGuyGreg on Twitter.

May 21, 2019 by Marty in California, Florida, World
© 2020 Uncle Walt's Insider. All rights reserved. All images used with permission. Unless otherwise attributed, all images licensed under Creative Commons CC0 license. This site is protected by reCAPTCHA and the Google Privacy Policy and Terms of Service apply.