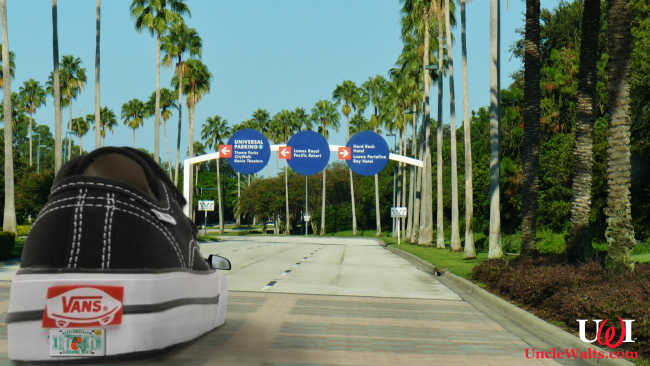 “You see, they’re like the Vans shoes. But a van.”

ORLANDO, FL — Always trying to one-up their resort rival Walt Disney World, Universal Studios Orlando announced today their own car service. Mimicking Disney’s successful “Minnie Vans,” Universal’s fleet of vehicles will be patterned after Van’s shoes, and will be known as “Van’s Vans.” Uncle Walt’s reached out to Universal (the company) spokesperson Junie Versal (no relation) for the inside scoop.

“The mindset is, if Disney has it, we should, too,” Versal (no relation) said. “So we’ve been working on our own car service for over a year.”

“Setting up the transportation network was the easy part,” she continued. “But what really sets Disney, I mean us, apart is theming. Most of our work has gone into what the cars would look like, and with some clever word play in their name. Like Disney’s Minnie Vans.

“Finally, someone made the connection with Van’s popular shoe line. We licensed the name and look, and soon there will be a fleet of shoe cars taking our guests around the Universal resort!

Versal (no relation) slumped a bit.

“Oh Lord, this is a really stupid idea, isn’t it?”

Should Universal be in shoe business? Let us know in the comments below!

November 26, 2018 by Marty in Florida
© 2020 Uncle Walt's Insider. All rights reserved. All images used with permission. Unless otherwise attributed, all images licensed under Creative Commons CC0 license. This site is protected by reCAPTCHA and the Google Privacy Policy and Terms of Service apply.