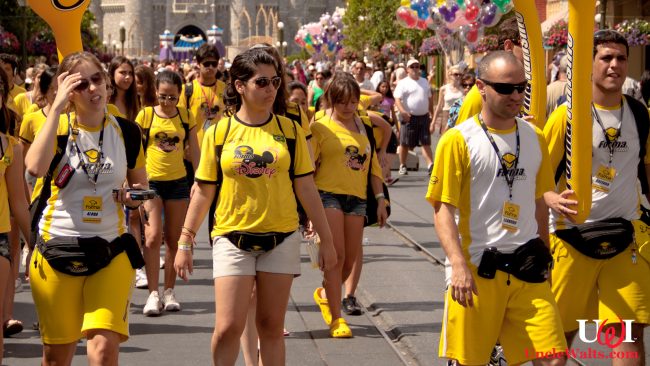 The Walt Disney World Resort in Florida plays host to many international visitors throughout the year. Most travel to the United States with family or friends, but many choose to come with organized tour groups.

You may be surprised to learned that Brazil is fifth among countries in the number of its citizens visiting Walt Disney World, with only the United States, Canada, the United Kingdom, and Vatican City topping Brazil’s numbers. Deserved or not, Brazilian tour groups have acquired an unfortunate reputation among other guests, and quite a lot of internet discussion has been generated by the conduct of some groups.

As a service to our neighbors from South America’s largest country, Uncle Walt’s Insider is proud to share these six tips for Brazilian tour groups coming to Walt Disney World. (Pro tip: this advice works for any guest!!!)

7. Be considerate of other people around you.

It seems simple, but being considerate can go along way for making everyone’s day more pleasant. Chanting is fine, but maybe don’t do it during a show that other guests are trying to hear? And maybe don’t block the entire street or walkway while chanting?

6. Be considerate of other people around you.

This looks a bit like the last tip, but maybe don’t push past other people already in line. Most cultures find that rude.

5. Be considerate of other people around you.

We came up with tip number five at 2:30 in the morning during a recent stay at the All-Star Sport resort, when we were awakened by loud shouting in Portuguese by unsupervised teens in the courtyard.

4. Be considerate of other people around you.

We, um, don’t mean to be repetitive, but really… get this one tip down, and the others kind of fall into place on their own.

…you know what? Yeah, it’s numbers two and one also. And it’s not just for Brazilians. Everybody, everywhere, in or out of Disney or other theme parks… just be good to each other, okay? Thanks.

Was this article too condescending? Let us know in the comments below!

Cover photo, of a totally nice, behaving tour group from Brazil –It’s not everybody, okay? by Scott Smith [CC BY-NC-ND 2.0] via Flikr.

Page 2 of 2«12
March 28, 2018 by Marty in Florida
© 2020 Uncle Walt's Insider. All rights reserved. All images used with permission. Unless otherwise attributed, all images licensed under Creative Commons CC0 license. This site is protected by reCAPTCHA and the Google Privacy Policy and Terms of Service apply.