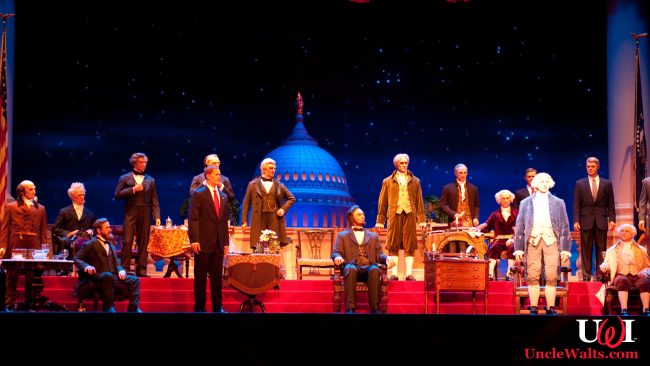 Onlookers were entertained by Jefferson and Madison rapping about Alexander Hamilton.

WALT DISNEY WORLD, FL — Cast Members arriving for their normal work day were met with protests by Presidents at the Magic Kingdom’s Hall of Presidents. Led by George Washington, the majority of the past Presidents joined forces to protest the division that is gripping D.C.

“This fine Union that we built is turning into shambles!” Washington shouted. “The patriots who fought to not only build, but sustain and protect this fine country, are being trampled on by those divisive nincompoops at the Capitol! They should all be ashamed!”

All of the past Presidents, minus those still living, vowed to not perform until the current set of Government officials can learn to work together. The protests were truly bipartisan, with both Federalists and Democratic Republicans taking part.

Can’t we all just get along? Let us know in the comments below!

Cover photo: The presidents, just before they lifted their picket signs, since UWI’s resident photoshopper didn’t have the energy. Photo by Josh Hallett [CC BY-SA 2.0] via Flickr.

December 16, 2019 by Walt in Florida
© 2020 Uncle Walt's Insider. All rights reserved. All images used with permission. Unless otherwise attributed, all images licensed under Creative Commons CC0 license. This site is protected by reCAPTCHA and the Google Privacy Policy and Terms of Service apply.