Survey: not one guest has heard of Swiss Family Robinson - Uncle Walt's Insider

Survey: not one guest has heard of Swiss Family Robinson 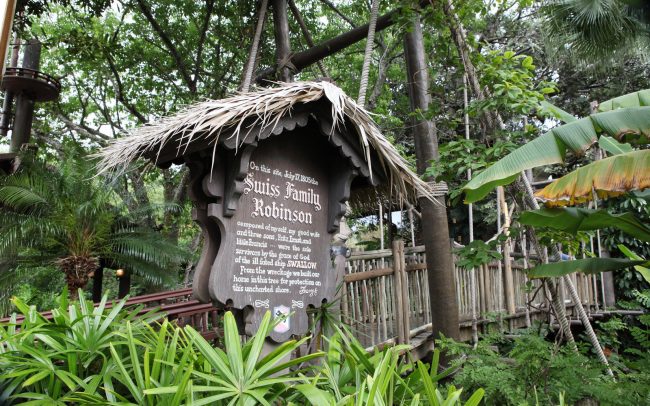 The Swiss Family Treehouse in Walt Disney World resort is one of the handful of attractions that has been in Magic Kingdom Park since it opened in 1971. If a new survey is to be believed, however, we soon may hear talk of changes to the experience — not a single Adventureland guest in a recent month had read, seen, or heard of The Swiss Family Robinson.

From screen to reality

The Magic Kingdom’s “Swiss Family Treehouse” is already a bit of an oddity. It’s not a show that you sit and watch. It’s not a ride. Based on Walt Disney’s Swiss Family Robinson, a 1960 film starring John Mills, the Treehouse is a walk-through experience, where guests climb steps in a (simulated) tree to view various “rooms” like those created by the shipwrecked family from the film.

Disneyland Park in California had its own Swiss Family Treehouse first, opening the attraction in 1962. As an obvious tie-in to the then-recent movie, it was a big success. Over time, however, both Treehouses have attracted fewer guests. Disneyland’s version was rethemed and renamed as “Tarzan’s Treehouse” in 1999.

The 1960 Disney film is only one of many movie adaptations of a popular 1812 novel by Swiss author Johann Wyss, but these days fewer and fewer guests have read the book or seen any of the movie adaptations. In mid-2016, Walt Disney World management commissioned a yearlong guest survey to find out how relevant the attraction still was, but the results have surprised even them.

Overall, less than 2% of those surveyed had heard of the book or film apart from the name of the attraction. And in September of this year, over 900 guests passing through Adventureland were surveyed, and not one of them had ever read, seen, or even heard of the Swiss Family Robison.

When asked why he though this was the case, Medved pointed to the west.

“Easy. California. Just about every national trend, good and bad, starts there and spreads across the country. Unfortunately, that includes cultural ignorance. It’s not just their own treehouse that they rethemed to Tarzan that proves the point. All you have to do is visit their Tom Sawyer Island… oops, I mean ‘Pirate’s Lair.'”

Imagineers are reportedly considering how the tree can be rethemed to Guardians of the Galaxy, since Peter Quill was once said to have been in a treehouse.

Should Swiss Family Treehouse be changed? Let us know in the comments below!

November 27, 2017 by Marty in California, Florida
© 2020 Uncle Walt's Insider. All rights reserved. All images used with permission. Unless otherwise attributed, all images licensed under Creative Commons CC0 license. This site is protected by reCAPTCHA and the Google Privacy Policy and Terms of Service apply.