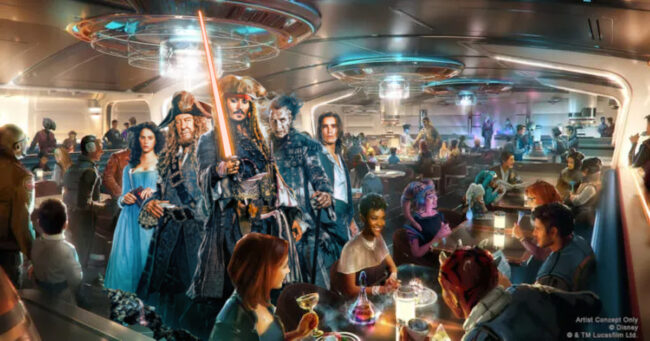 Pictured: artist’s concept of the pirate-…ing.

BATUU, OUTER RIM — Guests aboard the Halcyon starcruiser had a frightening experience recently in the Outer Rim Territories. A group of pirates, believed to be hiding out at Black Spire Outpost, boarded the starcruiser with blasters drawn and threatening guests and crew.

The Halcyon, a Corellian MPO-1400 model starcruiser (home port: Nassau, The Bahamas), is a 100-cabin vessel hailed as the “jewel of the Chandrila Star Line.”

Don’t you hate it when your blue shrimp and noodles meal is interrupted by blaster fire?

The assault on the Halcyon began as soon as the ship entered orbit around Batuu. Guests were just finishing up a lunch of blue shrimp and noodles when the first shots were fired and the Halcyon was boarded by pirates. The Captain first rounded up all of the redheads aboard the ship, but following a quick reprimand by Galactic Starcruiser HQ, found that the pirates just wanted the rum.

We found one guest willing to talk to us, Disney parks blogger and food critic Al Joe Coyote.

“There I was, finishing up some blue shrimp that another guest left behind,” A.J. said, “when all of a sudden these guys come rushing in with blasters yelling and screaming. I asked one of the, oh, at least 17 Jedi sitting around me if they were going to do something. Those cowards just hid under their tables. Makes me think they aren’t Jedi at all!”

He continued, “So the captain starts barking orders to the crew, but then stops to take a phone call. Turns out we have great reception in space! Anyway, she left the room, and we didn’t see her the rest of the cruise. Kinda odd.”

This is actually completely plausible

“Getting back to the story, the pirates are yelling for everyone to give up their credits and were threatening to shoot everyone, then a voice from the back of the room yelled, ‘We are on a Disney vacation, we have no money!’

Well, the pirates sorta looked at each other and looked around the room. Then they just shrugged and left. On a side note, I found the blue shrimp and noodles to pair nicely together, just a touch more garlic and it would be perfect. Overall I give it a 7 out of 10.”

I just saw a job opening for Ships Captain – Halcyon pop up on the Disney website. Coincidence? Let us know in the comments below!

Cover photo: Not an actual photo of the boarding, but wouldn’t it be cool if it happened like this? Artist concept © Lucasfilm & Disney.

August 22, 2022 by Walt in Florida, Uncle Walt's Food Blog
© 2020 Uncle Walt's Insider. All rights reserved. All images used with permission. Unless otherwise attributed, all images licensed under Creative Commons CC0 license. This site is protected by reCAPTCHA and the Google Privacy Policy and Terms of Service apply.