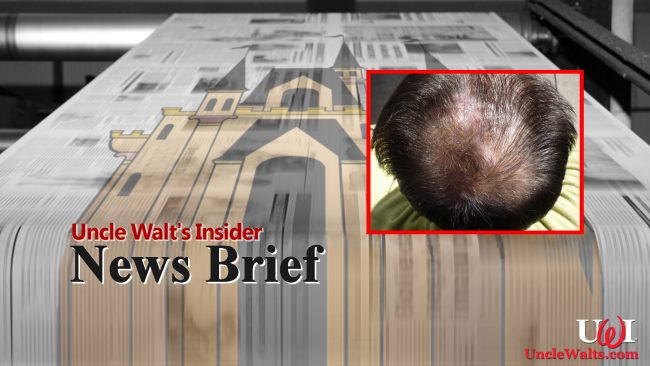 ORLANDO, FL — A College Program cast member at Disney’s Magic Kingdom Park has discovered a use for the mysterious slime in the utility tunnels beneath the park.

Walt Disney World guests have often heard about the “Utilidors,” the mysterious tunnels under the Magic Kingdom, but cast members working in the MK know that the tunnels are home to a mysterious “sludge” that will drip down from random spots in the ceiling. Fergus McMichaelson, a college program Cast Member, recently realized that he had been hit by some of the sludge as he walked through the Utilidors. McMichaelson, a chemistry student at the SUNY College of Environmental Science and Forestry, took his soiled t-shirt home and performed a chemical analysis on the drippings, and was shocked to discover that the mysterious compound could “probably cure baldness in most humans” if ingested.

If this is indeed true, it could completely revolutionize the hair transplant industry. However, not everyone is thrilled with the discovery. Paul, a custodial cast member, told Uncle Walt’s, “I’ve been losing my hair for 10 years, but I’ve smelled tunnel sludge. I’d rather lose my hair than eat that stuff.”

Inset photo, of a bald spot untouched by sludge, by Ambernectar 13 (CC BY-ND 2.0) via Flikr.

March 27, 2018 by X in Florida
© 2020 Uncle Walt's Insider. All rights reserved. All images used with permission. Unless otherwise attributed, all images licensed under Creative Commons CC0 license. This site is protected by reCAPTCHA and the Google Privacy Policy and Terms of Service apply.