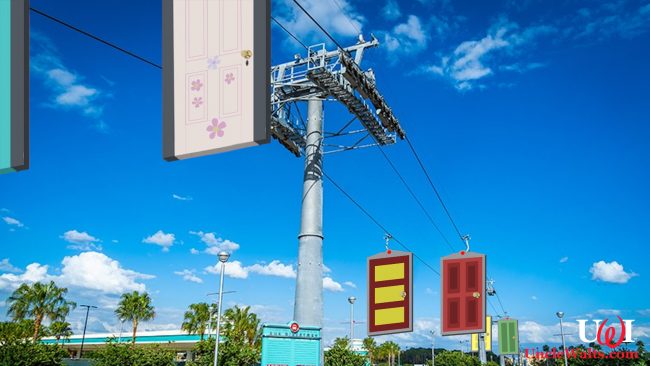 It’s especially good for guests with a strong grip and upper body strength.

WALT DISNEY WORLD, FL — We had great hopes for the Disney Skyliner, but apparently it’s a bust. Disney hasn’t released official numbers, but word of mouth is that no one has ridden it in over a month. NO ONE!

Add to that Disney’s desire to add more thrill rides at the Walt Disney World Resort and Spa, and you’ve got the latest exciting attraction from the mind of the Imagineers. That’s right — the Disney Skyliner will reopen as the “Monster’s Inc. Door-liner”!

Disney (the company) spokesperson Jun Disney (no relation) gave us the details.

“We’ve put away the gondolas and are installing doors on all the cables,” Disney (no relation) says. “It’ll still get you from place to place, sure, but with much more of a thrill aspect involved. After all, we anticipate that a lot of guests won’t make it all the way.

“Of course, there’s a special treat waiting if you can get a small child to laugh during the ride, and then go through the door!”

The new attraction will open with the rest of the resort. In the meantime, Disney (the company) is installing signs at each station advising guests to make sure their hands are dry and not at all slippery.

Where do you think you’ll end up if you go through the door? Let us know in the comments below!

May 6, 2020 by Marty in Florida, Spotlight
© 2020 Uncle Walt's Insider. All rights reserved. All images used with permission. Unless otherwise attributed, all images licensed under Creative Commons CC0 license. This site is protected by reCAPTCHA and the Google Privacy Policy and Terms of Service apply.