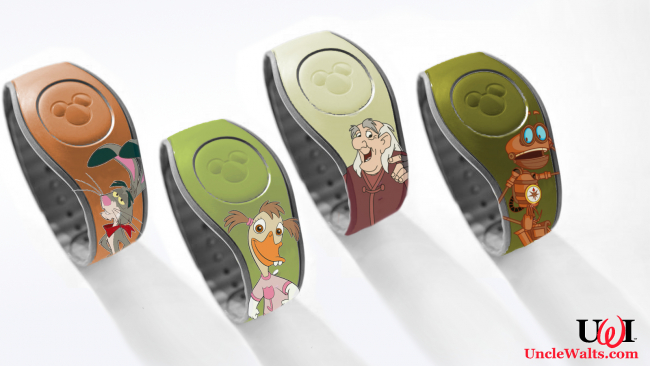 They’re curious whether Disney fans really will buy anything.

That’s the word from Violet Wahner, Senior Marketing Assistant for the Walt Disney World Parks and Resorts and Spas, about the new series of unattractive Magic Bands released today.

“We’ve had this debate in Marketing for some time,” Wahner tells Uncle Walt’s Insider. “Most of the team is always trying to put the best, most interesting and desirable products out there. But several of us recognize that Disney fans will buy anything. And I mean anything. We’re just putting it to the test.”

“How bad can we make them?”

“When we finally got clearance to run this experiment from the higher-ups,” Wahner continues, “the next question was, ‘How bad can we make them?’ I have to admit this part was fun. We got to find really unappealing colors. And then one of my coworkers had the idea to dredge up barely known characters from some of the bad films to add.”

The new Magic Bands come in colors such as rust, avocado, “puke green,” and darker avocado. They will feature secondary characters from such non-beloved Disney films as Home on the Range, Chicken Little, The Black Cauldron, and Treasure Planet.

“We’re not even calling them a ‘limited edition,” Wahner says. “We don’t even want people to think they’ll miss out on them if they don’t order. We’ll make as many as we can sell.”

But why, we wondered? Wahner says it’s simple:

“Easy. If these things sell, we’ve proven the point that it won’t matter what kind of junk we crank out, as long as it has ‘Disney’ on it somewhere. It’ll make our jobs in Marketing so much easier.”

We’ve already ordered ours! How about you? Let us know in the comments below!

February 11, 2019 by Marty in Florida
© 2020 Uncle Walt's Insider. All rights reserved. All images used with permission. Unless otherwise attributed, all images licensed under Creative Commons CC0 license. This site is protected by reCAPTCHA and the Google Privacy Policy and Terms of Service apply.