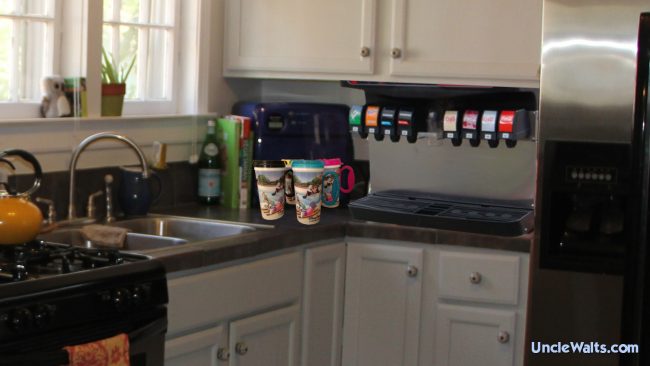 Soda is bad for your health, mmm-kay?

For all the soda addicts out there, here’s an ingenious way to help fight the addiction. Uncle Walt’s Insider has the exclusive story about a Florida man who has installed a commercial soda dispensing system in his home, and says that it will cut down on the amount of soda his family drinks.

What is Rapid Fill?

For a long time, Disney Resort Guests have been able to buy refillable mugs, which they could use throughout their stay to refill with pop at specific locations within their resort. In 2012, Disney noticed that people would keep bringing their mugs back, over and over, limiting sales of new mugs. They started installing the “Rapid Fill” system, a computer controlled system that reads an RFID chip in the mugs, and only allows it to dispense within certain dates.

Mark McElwain, a Florida man, decided that his family was drinking too much soda, and decided to find a way to cure their addiction. He contacted Uncle Walt’s Insider asking us to spread the word about his unique solution. McElwain arranged with Disney to purchase a Rapid Fill system that was being retired, and had a local plumber install it in his kitchen.

When asked about his decision, McElwain said “Well, my family was drinking a lot of soda. Probably too much. It was costing me a lot of money, and what’s worse, everyone liked different flavors. Little Mikey likes Sprite, Marjorie likes Mr Pibb, and my wife, Martha, likes Diet Coke. I was tired of buying all those different bottles, and I want to try and get my family over their addiction to soda.”

“We vacationed at Walt Disney World, and they had these fancy machines, and I thought to myself that’s a great idea, a great way to limit the amount of soda they’re drinking. I can setup something just like that, and the machine’ll do all the work for me. I’m charging (my family). $5/day, or they can buy a 14 day pass for $20. I’m hoping that I can cover the cost of the machine and the supplies. Any extra money I make will just go into the kids’ college fund.”

We asked Mark if he’s run into any challenges with the system.

“It kinda takes up a lot of room. We’ve had to get rid of our toaster and our microwave to make room for the Rapid Fill machine. It’s also messy, all the hoses and syrup, it gets pretty sticky.”

Mark’s 12 year-old son, Mikey, interrupted with his own thoughts on the situation.

“It’s not fair that we have to pay for soda. We’re kids, our parents should be paying for everything. I was spending all my allowance on soda, and I had to get a job to try and pay for it. Do you know how hard it is to get a job as a 12 year-old? About the only thing is delivering newspapers! And who reads newspapers anymore? Yeah, the soda machine was fun at Disney, but I don’t want it at home. Plus, without a microwave, I can’t make pizza rolls anymore.”

Daughter Marjorie shared her brother’s opinion, stating “I can see where Dad’s coming from, but I’m not a fan.”

Tom Marsden, a spokesperson for the Coca Cola Corporation said that it was unusual to have a commercial-grade machine installed in a home. “Yes, we’re providing them syrup, not standard, but they’re paying, so we can’t really stop it. I don’t think it’ll catch on.”

Although the family isn’t thrilled with the setup, McElwain says, he’s “not heartless.”

“I do give them other options. For instance, I have the system set up so that they can get all the Beverly that they want.”

February 23, 2018 by X in Florida, Other
© 2020 Uncle Walt's Insider. All rights reserved. All images used with permission. Unless otherwise attributed, all images licensed under Creative Commons CC0 license. This site is protected by reCAPTCHA and the Google Privacy Policy and Terms of Service apply.