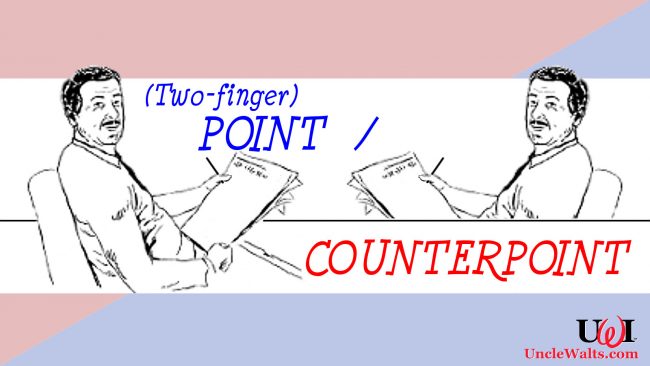 (Two-finger) Point/Counterpoint is a recurring feature we just thought up where we debate with ourselves about current theme park news.

SUBMITTED: The Churro Ice Cream Sandwich is an abomination from the pit of hell and must be stopped before lives are lost.

It was bound to happen eventually. It seems that every stupid idea starts in California and then spreads across the nation. Just look at all the bad trends that started in California: earthquakes, socialism, the Kardasians. And now, according to the Disney Food Blog, something called a Churro Ice Cream Sandwich, which started at Disneyland’s Downtown Disney (California!) four years ago, is now coming to Walt Disney World.

On its surface, perhaps joining tasty, glorious churros with lowly vanilla ice cream sounds like a good idea. Even our own writer X seems ready to embrace the concept. But here’s the problem with this: what ice cream could ever possibly be worthy enough to be paired with the cinnamony perfection of a churro? I’ve never found it.

I don’t want to be accused of exaggeration, but churros are perfection. Churros are life. If you think it’s necessary to add something to an already perfect food, you invite chaos, disorder, the downfall of society, and the oncoming of the apocalypse and mass destruction of the Earth. Do we really want that on our consciences?

Will we pay a price for not nipping this in the bud before it left Anaheim? Time will tell. In the meantime, though, can we afford to wait? Take action now: share this message on all of your social media accounts, write Disney CEO Robert Iger, write your congressman, write consumer reporters and all your local media outlets. The Churro Ice Cream Sandwich must be stopped.

Okay, I tried one. They’re not bad, actually.

[Ed.: Sorry about this, folks. Marty often wanders around the office debating himself — he’s under a delusion that he’s his own identical twin — but we didn’t notice he’d written an article taking both sides in an argument until after it was published. We’ll try to start reading his stuff in advance now.]

Do you ever argue with yourself? While eating a churro ice cream sandwich? Comment below!

June 23, 2018 by Marty in California, Florida, Other
© 2020 Uncle Walt's Insider. All rights reserved. All images used with permission. Unless otherwise attributed, all images licensed under Creative Commons CC0 license. This site is protected by reCAPTCHA and the Google Privacy Policy and Terms of Service apply.