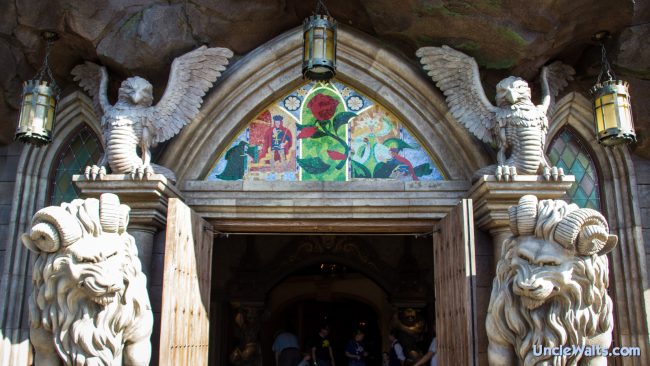 ‘Be Our Guest’ was just the first to be announced.

Disney foodies and fans of dining at the Walt Disney World Resort are still adjusting to the news that the Beauty and the Beast themed Be Our Guest Restaurant will become a prix-fixe, deluxe dining restaurant (requiring two table-service credits on the Disney Dining Plan). The move is widely seen as necessary to help pay off the multitude of legal fees and settlements of lawsuits filed by the Beast’s support staff after they were forced to spend ten years enchanted as various household objects.

But Be Our Guest won’t be the only restaurant going down this path. Uncle Walt’s Insider has learned that several other popular Disney restaurants will be reclassified as “deluxe,” including Pizzafari at the Animal Kingdom and Club Cool at Epcot.

Walt Disney World has always been known for its food offerings. From the earliest days of the resort, the parks and hotels have offered dining options from high-end to take-out, with an emphasis on quality and high prices. Disney has been able to offer food at prices that “cater” [get it?] to many guests’ budgets, ranging on the entire scale from “pricey” to “expensive” to “really, really expensive” to “if you have to ask, you really shouldn’t be taking your prom date to Victoria and Albert’s.”

With the advent of the Disney Dining Plan in 1979, guests were offered the option of prepaying a set amount (calculated by adding up the prices of the costliest possible menu items you might get during your stay) in advance, and then being able to forget the ungodly amount you’d spent on food by converting it to meal credits. Disney bloggers at the time hailed the plan offering as being perfect for those guests who don’t like to budget or think about money until the bills arrive. (It’s possible, too, to get the Dining Plan for free if you are among the first five guests to call and book a resort room and park tickets package at 2:37 a.m. on the one random, unannounced day a year Disney offers the Free Dining Plan.)

Most Disney restaurants are classified as either “table service” or “quick (or counter) service.” Many of the finer dining experiences or character table service meals are labeled as “deluxe” and require two table service credits on the meal plans, ensuring that Disney gets more value for your dining dollar. Quick service restaurants require one quick service credit, and each dining plan also comes with snack credits which can be spent on drinks, cupcakes, churros [yes!], or if you want to just waste your credits, cream-cheese filled pretzels.

The Be Our Guest Restaurant has from its opening confusingly offered quick-service options and pricing at breakfast and lunch (although food was served at your table by wait staff), and became a table service restaurant in the evening, with the ability to order off of a menu (just like Belle) and experience dancing and singing cutlery (also just like Belle).

With the new announcement, Disney has confirmed that Be Our Guest will convert to a prix fixe menu in the evening [Ed.: that’s French for “fixed prix”] and will now require two table service credits per diner. Joining Be Our Guest will be a host of other restaurants throughout Walt Disney World, both table-service and quick-service, including Pizzafari and Flame Tree Barbecue in Disney’s Animal Kingdom Theme Park; the Electric Umbrella, Sunshine Seasons, and Club Cool in Epcot; the ABC Commissary in Disney’s Hollywood Studios; and various other resort restaurants, including the Everything Pop food court at Disney’s Pop Century Resort and Spa.

Cinderella goes the other direction

The news is not all bad for budget-minded travelers. With the conversion of multiple restaurants to deluxe status, one formerly deluxe restaurant will be downgraded to “counter service” status. Cinderella’s Royal Table, once an incredibly difficult place to book, has plummeted in popularity since the so-called “Perla and Gus” December incident in the CRT kitchens became known publicly. Currently closed for renovations, the Royal Table will now be a walk-up, counter-service restaurant with no reservations required, and serving a variety of “mouse-themed” dishes for order. Never let it be said that Disney doesn’t have a sense of humor!

Will you ever eat at Cinderella’s Royal Table again? Let us know!

Cover photo by HarshLight [CC BY 2.0] via Wikimedia Commons.

March 2, 2018 by Marty in Florida
© 2020 Uncle Walt's Insider. All rights reserved. All images used with permission. Unless otherwise attributed, all images licensed under Creative Commons CC0 license. This site is protected by reCAPTCHA and the Google Privacy Policy and Terms of Service apply.