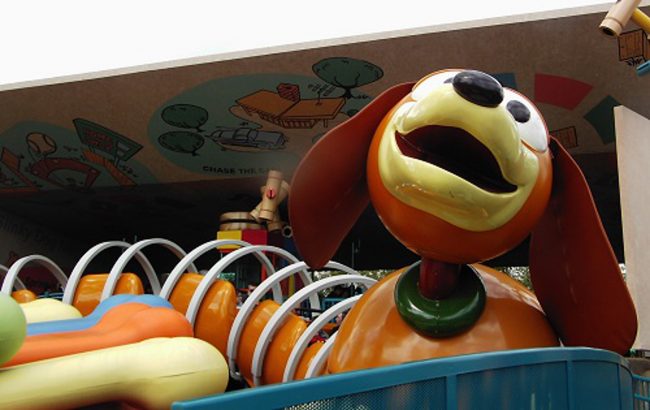 Just two months after the first vehicle for the upcoming roller coaster Slinky Dog Dash arrived at Disney’s Hollywood Studios, park officials have announced that the vehicle has become “tangled beyond repair.” Workers were cautioned against playing with the Slinky-themed vehicle, but apparently found it irresistible, making it walk down giant stairs and having it expand and contract. After the vehicle’s springy shape hooked in on itself, the workers spent weeks trying to untangle it, but only succeeded in making it worse. A replacement ride vehicle has been ordered. In the meantime, Disney Imagineering is investigating whether the unusable vehicle can be rethemed to the Disney film Tangled.

Orange County Health officials state that several guests at Universal Studios Orlando’s Islands of Adventure theme park were exposed to gamma radiation while riding the Incredible Hulk roller coaster. Universal has not yet released a statement concerning the incident and did not respond to requests for comment, but have closed the attraction. The guests in question were examined at a local facility and released. Officials say that the guests’ green-tinged skin, unusual aggressiveness and limited vocabulary are only temporary.

Disney parks have always tried to balance the need for security on their properties against the desire for a pleasant guest experience, but new checkpoints within Epcot are causing problems. The ten new “international crossings” on the walkways around World Showcase Lagoon, positioned between the various international pavilions, are slowing foot traffic. Guests at each crossing are required to show a passport and pass through metal detectors before being allowed to continue to the next “country.” A Disney spokesperson says that the slowdown may only be temporary, as the park plans to install special expedited screening lanes for members of “trusted traveler” programs such as Global Entry and Nexus.

Disneyland Resort guest Hilda Paredes of San Antonio, Texas, attracted crowds of followers when another guest spotted a “hidden Mickey” on the back of her neck, apparently formed by a cluster of naturally-occurring moles. The disappointed crowds later dispersed after Paredes wiped her neck with a napkin, revealing the left ear of Mickey to be a mosquito she had swatted the day before.

November 12, 2017 by Marty in California, Florida, Other
© 2020 Uncle Walt's Insider. All rights reserved. All images used with permission. Unless otherwise attributed, all images licensed under Creative Commons CC0 license. This site is protected by reCAPTCHA and the Google Privacy Policy and Terms of Service apply.