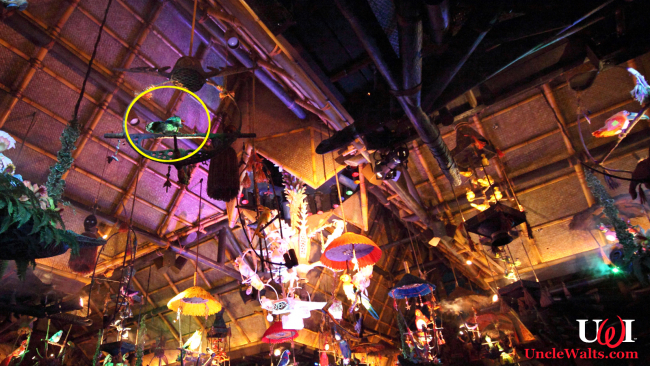 It may not be dead, though, but just resting.

WALT DISNEY WORLD, FL — As anyone who has ever set a backpack down in their Glendale, CA, offices knows, Disney Imagineers love to hide things. More specifically, though, they love to place Hidden Mickeys and tributes to other favorite things inside of attractions. While the hidden tributes tend to be only of Disney properties and former rides, occasionally a non-Disney item is snuck in. Well-known examples include Mr. Limpet in the Little Mermaid rides, or the Minion animatronics in Galaxy’s Edge.

Uncle Walt’s Insider can now confirm that there is a tribute to Monty Python’s Flying Circus in the Magic Kingdom’s Enchanted Tiki Room. (Full name: “Walt Disney’s Original Enchanted Tiki Room Except For the One at Disneyland: Formerly Under New Management But Now Back to the Same Old Management.”) And yes, it’s a dead parrot.

“Yep, that’s on purpose,” said Disney (the company) spokesperson Jun Disney (no relation). “It’s totally a tribute to the Dead Parrot Sketch, placed there intentionally. It is not, I repeat, not just another in a long line of recent audio-animatronic malfunctions. No, sir.

“And also, technically, the parrot is not dead. It’s just pining for the fjords.”

Is it just resting, or has it joined the choir immortal? Let us know in the comments below!

May 15, 2019 by Marty in Florida
© 2020 Uncle Walt's Insider. All rights reserved. All images used with permission. Unless otherwise attributed, all images licensed under Creative Commons CC0 license. This site is protected by reCAPTCHA and the Google Privacy Policy and Terms of Service apply.