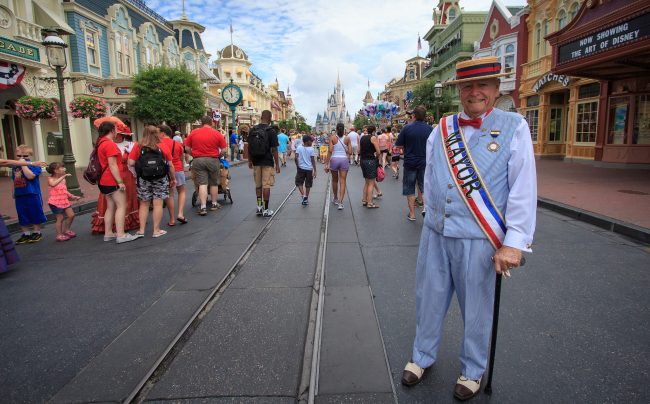 December in Disney’s Magic Kingdom Park might have been unpleasant, as a long-simmering trade dispute between Tomorrowland and Frontierland threatened to bring the 2017 holiday season to a screeching halt — that is, until the Mayor of Main Street U.S.A. stepped in!

In 2011, the most-talked about treat at the Magic Kingdom was a pretzel in the likeness of Mickey Mouse. It was only available in Frontierland and fans of this tasty treat flocked there to buy one, leaving the other lands short of customers.

As a result, vendors in other areas of the park began resorting to gimmicks to try and sell their treats. Tomorrowland officials offered to host a “good ole down-home style hoedown” at the Tomorrowland Stage in exchange for rights to sell pretzels at The Lunching Pad. Frontierland officials were quick to point out they already had a hoedown, and “there ain’t no cotton-pickin’ way they were going to let a bunch of wannabe space cowboys” take that, or the pretzels, away from them.

Caught in the middle

The Mayor of Main Street, U.S.A. first heard about the trade dispute while on a visit to Adventureland. He had just successfully negotiated the release of the Redhead from the Jungle Cruise Skippers, who mistakenly thought they were rescuing her from the Pirates of the Caribbean. The Redhead was safely returned back to the pirates so she could be auctioned off to the highest bidder.

The Mayor, always a kind soul, hated to hear about strife inside of his beloved Magic Kingdom. He brought his concerns to Mickey Mouse himself, but Mickey was too busy overseeing the build of New Fantasyland to intervene. Mickey did suggest bringing in Goofy to mediate the dispute.

The Mayor took Mickey’s advice, but predictably, after the first meeting between Goofy and representatives from each land the trade dispute exploded. Tomorrowland officials refused to build a train station, stating that anyone coming in from Frontierland could walk. Frontierland officials went silent, until last year when they finally responded by sending a delegation from the Country Bear Jamboree to Tomorrowland to prove that not all bears <censored> in the woods.

An attempt by Tomorrowland to retaliate backfired when Stitch’s badness level reached alarming heights, resulting in the shutdown of Stitch’s Great Escape.

A solution to this problem suddenly came to the Mayor while he was vacationing in Mexico [the Mexico Pavilion at Epcot, that is]. With a fresh revelation and churros in hand, he summoned the officials from Tomorrowland and Frontierland to a meeting, and this time the Mayor had Donald Duck at his side.

As Donald read off the terms of a new agreement, no one had any idea what he was saying. Donald repeated himself numerous times, working himself into a frenzy. As the feathers settled, both sides agreed they couldn’t sit through this for another minute, and signed the agreement. To this day, no one has any idea what the agreement says, and the papers are locked away at City Hall.

Sadly, soon after this ended and peace was restored to the Magic Kingdom, George Weaver, the Mayor of Main Street, U.S.A., passed away. His memory and legacy will live on Main Street, U.S.A. for generations to come. So the next time you’re enjoying a tasty pretzel in Tomorrowland, take time to remember who made it possible.

Do you have a favorite time meeting the Mayor?
Let us know in the comments below!

January 8, 2018 by Walt in Florida
© 2020 Uncle Walt's Insider. All rights reserved. All images used with permission. Unless otherwise attributed, all images licensed under Creative Commons CC0 license. This site is protected by reCAPTCHA and the Google Privacy Policy and Terms of Service apply.