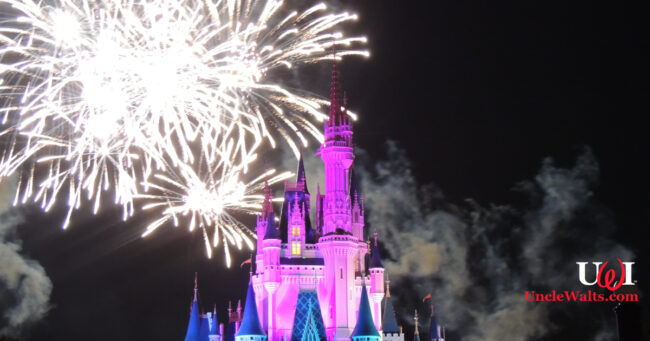 So apparently when you wrap a fireworks shell in a mask, it doesn’t work the same? Huh.

MAGIC KINGDOM, FL — As billions of guests once again pass through Disney parks turnstiles each day around the globe, one thing has been missing: fireworks. It’s been over a year since Disney put on a fireworks show.

Or so we thought — Disney (the company) insists that the fireworks never left!

A muffled Fantasy in the Sky

“The fireworks?” Disney (the company) spokesperson Disney (no relation) explains, “We’ve had them every night since the parks re-opened last year! We did tend to notice that none of the guests were sticking around to watch, though.

“We finally realized, after months of research, why that was: they were MASKED!

“No, not just the guests. The fireworks were masked, too. See, the fireworks are actually classified as ‘disposable employees’ [Ed.: the same classification as College Program Cast Members], and as such, CDC guidelines stated they had to be masked. So each explosive shell went up wearing a mask. The masks contained the explosive part, so you couldn’t see anything. But if you listened closely, you could hear them, just barely.

Disney (no relation) is excited that the standards have relaxed a bit.

“Given that guests can run amuck maskless once again, we gave the pyro guys the all clear to remove the masks from the fireworks. But it takes a while to unwrap them all, hence the July 1st ‘start date.'”

Per CDC guidelines, College Program Cast Members will still have to wear masks until they explode.

Did you ever watch the masked fireworks shows? Let us know in the comments below!

Cover photo: What fireworks looked like before they were forced to wear masks. Photo by Candace Lindemann [CC BY 2.0] via Flickr.

June 28, 2021 by Walt in Florida
© 2020 Uncle Walt's Insider. All rights reserved. All images used with permission. Unless otherwise attributed, all images licensed under Creative Commons CC0 license. This site is protected by reCAPTCHA and the Google Privacy Policy and Terms of Service apply.