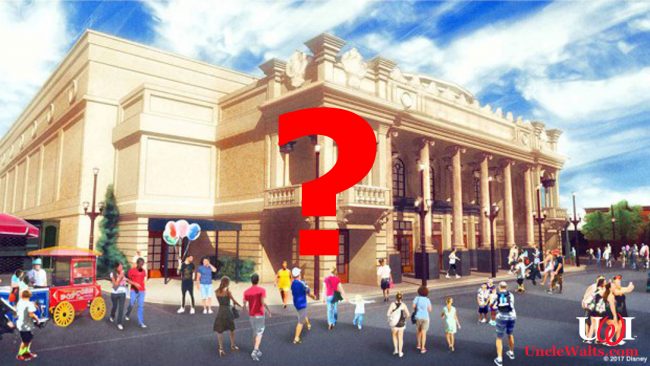 The announced theater has not been canceled! There just won’t be walls. Or a ceiling.

WALT DISNEY WORLD — Good news out of Orlando! The Main Street Theater project, which was announced at the 2017 D23 Expo, has not been canceled. Rumors have been flying that the costs of replacing the aging monorail fleet meant the budget for this new theater was going away.

Uncle Walt’s Insider has learned that that is not the case. Instead, the budget for the new theater is just being trimmed, and will only eliminate non-essentials from the construction of the theater.

What are those non-essentials that are being cut? Final plans have not been released, but they are likely eliminating only the ceiling, walls, doors, chairs, lighting and sound.

The new “open-air” theater, occupying what is currently a parking lot backstage to the east of Main Street USA, will still serve as a parking lot when shows are not running. For performances, however, guests will gather around a couple of flatbed trucks parked back to back which will serve as a makeshift stage.

With no startup or operational costs, other than performers’ salaries and show scripts, we may see the revised plans happen sooner than they otherwise would have. On with the show!

Are you excited about the Main Street Backstage Theater? Comment below!

Cover photo, a poor artist’s concept of a building that won’t happen, © 2017 Disney..

April 21, 2018 by Marty in Florida
© 2020 Uncle Walt's Insider. All rights reserved. All images used with permission. Unless otherwise attributed, all images licensed under Creative Commons CC0 license. This site is protected by reCAPTCHA and the Google Privacy Policy and Terms of Service apply.