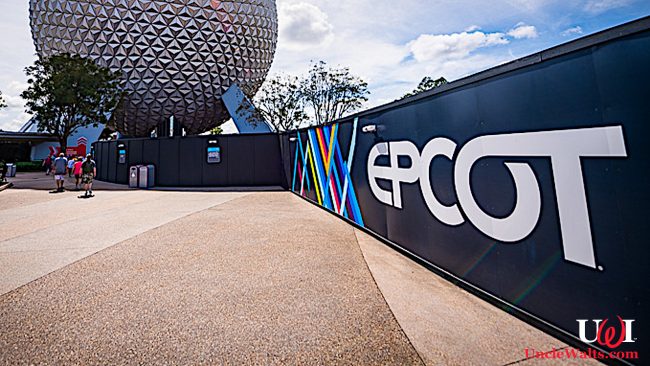 All alone or in twos, the ones who really love you walk up and down outside the wall.

WALT DISNEY WORLD, FL — As we noted in an article update recently, Epcot will soon be home to Disney’s “The Magic of Construction Walls” tour. The popular tour originated in Disney’s Hollywood Studios, but was discontinued after the opening of Galaxy’s Edge.

Like the previous offering, this tour will take guests throughout Epcot’s multiple construction areas. The survey of the approximately 63 miles of construction walls currently in place in the park is scheduled to take 6-8 hours. Park admission is not included.

Of course, any guest can look at the public side of the walls for free. But those taking the tour will be taken into some construction areas to see the other sides! (The press release notes that this aspect of the tour may be limited by safety factors or by how tired the Cast Member’s feet are during the tour.)

As in the Studios, guests may find that the construction workers have written on the side of the walls opposite the guest areas. While that hidden graffiti can be entertaining, it also means that the tour is only open to guests ages 21 and up.

Just the walls, not what’s beyond

Disney reminds guests that the “Magic of Construction Walls” tour is not a tour of any of the new areas or attractions, just the construction walls. Guests hoping to catch a glimpse of details about the new Ratatouille or Guardians of the Galaxy rides will be disappointed. In fact, if the tour is anything like the one at the Studios, Disney will build secondary walls behind the first ones to block the tour from seeing the new areas.

For an additional fee, guests may purchase and take home the mouse-ear hard hats they wear on the tour.

Will this tour be better than the Studios construction wall tour? Let us know in the comments below!

Cover photo: Just one of the many exciting construction walls this tour will cover! Photo by Disney Tourist Blog, used by permission.

March 3, 2020 by Marty in Florida
© 2020 Uncle Walt's Insider. All rights reserved. All images used with permission. Unless otherwise attributed, all images licensed under Creative Commons CC0 license. This site is protected by reCAPTCHA and the Google Privacy Policy and Terms of Service apply.