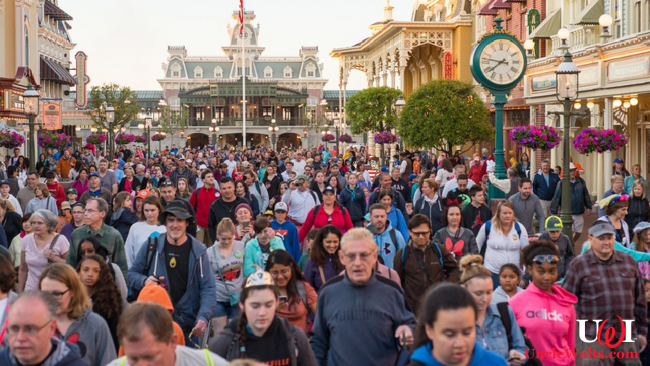 WALT DISNEY WORLD, FL — Disney officials have announced a new step towards increasing guest enjoyment on the Magic Kingdom’s most crowded days. No, not reducing the number of guests allowed in — that just wouldn’t be the Disney way! Instead, Where’s Waldo, the popular book series, is coming to life at Walt Disney World!

“Where’s Waldo: the Interactive Experience” joins the Magic Kingdom’s three other current live games: Sorcerers of the Magic Kingdom, Where’s the Exit, and Please Can We Just Sit Down for a Minute?

In Where’s Waldo, a Cast Member will be costumed as Waldo (complete with his own Disney oval name badge in case there’s any confusion) and will mingle in the large crowds somewhere in the park. There won’t be any need for him to hide, since (as anyone who’s ever dealt with peak crowds knows) even if he’s spotted, actually getting to him will be nearly impossible!

Gameplay is simple: the first one hundred guests to find Waldo and physically carry him to City Hall will receive a buy one, get one free churro coupon! Mmm, churros…

Park officials are hoping that the scramble to capture Waldo and get him to Guest Services will help alleviate lines for attractions, while providing guests who love churros with some much-needed exercise.

Have you found Waldo at the Magic Kingdom? Let us know in the comments below!

September 11, 2018 by Marty in Florida
© 2020 Uncle Walt's Insider. All rights reserved. All images used with permission. Unless otherwise attributed, all images licensed under Creative Commons CC0 license. This site is protected by reCAPTCHA and the Google Privacy Policy and Terms of Service apply.