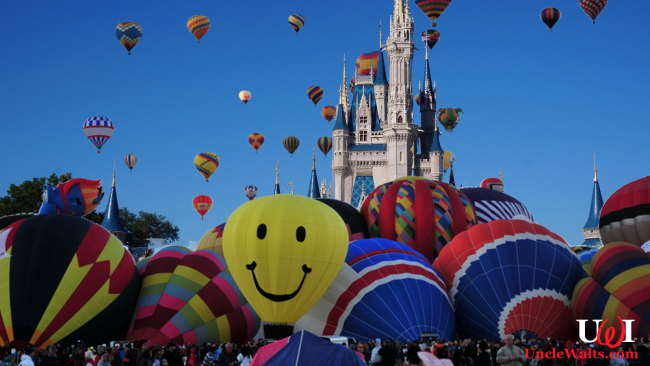 The Magic Kingdom is still recovering from yesterday’s debacle, where over 500 hot air balloons and their crews were added to the already heavy June crowds.

“We really didn’t think this one through,” says Disney (the company) spokesperson Jun Disney (no relation). “It was not pretty. Someone in middle management had been to the Albuquerque Balloon Festival last year, and came back wanting to see the same spectacle here.

“It was a spectacle, all right.”

Disney (the company) has not released any figures on numbers of guests injured, but does say the three fatalities in the park yesterday were “probably” not caused by the balloons. A quick perusal of YouTube videos of the day indicates at least seventeen balloons snagged on the spires of Cinderella Castle and had to be rescued.

Disney (no relation) was not ruffled.

“Hey, we dreamed it, we did it. Not everything has to be a home run. And I’m sure things will go smoother for next week’s Piranha Juggling Festival at Epcot.”

How many people do you think yelled “Oh, the humanity!”? Let us know in the comments below!

Cover photo: Chaos at the first (and last) ever Magic Kingdom Balloon Festival. Photo by ErikAggie [CC0] via Pixabay & adventurejay.com

June 19, 2019 by Marty in Florida
© 2020 Uncle Walt's Insider. All rights reserved. All images used with permission. Unless otherwise attributed, all images licensed under Creative Commons CC0 license. This site is protected by reCAPTCHA and the Google Privacy Policy and Terms of Service apply.