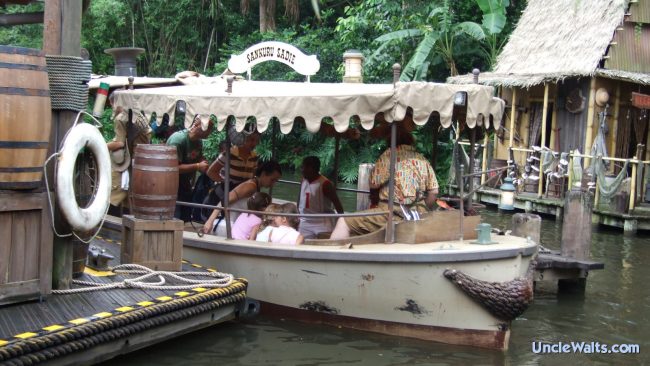 Has the former Jungle Cruise skipper returned to his roots?

A Jungle Cruise aficionado and Uncle Walt’s Insider fan named Burt Kirby says he recently spotting a familiar face while boarding the Cruise at Magic Kingdom Park for his 26th trip of the day. Pixar head John Lasseter, who is on hiatus from his duties at that studio, was busy loading guests onto the “Sankaru Sadie”, Mr. Kirby reports.

Out of the public eye

Most scandal-rocked celebrities disappear from public life, so Uncle Walt’s Insider was surprised to hear that Lasseter might be working at the Jungle Cruise. We decided to look into it ourselves.

Since we are well known and respected reporters, we knew we had to send in a spy. We do not want to reveal who our spy is, so we’ll just call him Roy. (Note: come up with a fake name and swap it in for Roy’s before publishing.)

Roy confirms that it was indeed Lasseter working the docks. Roy used a simple technique where he verified the name tag said “John”, used pictures and facial recognition software, googled it, and finally, he asked if he was in fact John Lasseter. Mr. Lasseter asked us to keep it quiet that he is working there, to avoid huge lines, excessive waits, and one too many selfies with his annoying fans. (Ed.: did he say annoying or adoring?)

Celebrities not uncommon at Disney Parks

In doing some additional research, Uncle Walt’s discovered that is not at all uncommon for celebrities, and even politicians and historical figures, to make appearances at the parks. In fact, we discovered long lines all over, in every Disney Park, as people waited to meet movie stars such as Mary Poppins, Mickey Mouse, and even Cinderella’s step sisters. We also found it exciting that the President of the United States was giving a speech at the Magic Kingdom’s Hall of Presidents, but it turned out to be failed presidential candidate Hillary Clinton, dressed up as Donald Trump.

Because nothing is too good for Uncle Walt’s readers, we commit ourselves to continue to put Roy at risk to bring you the latest in park news and rumors.

Have you spotted celebrities working at Disney Parks? Let us know in the comments below!

February 21, 2018 by Walt in California, Florida
© 2020 Uncle Walt's Insider. All rights reserved. All images used with permission. Unless otherwise attributed, all images licensed under Creative Commons CC0 license. This site is protected by reCAPTCHA and the Google Privacy Policy and Terms of Service apply.