Accusations of hazing among Dapper Dans 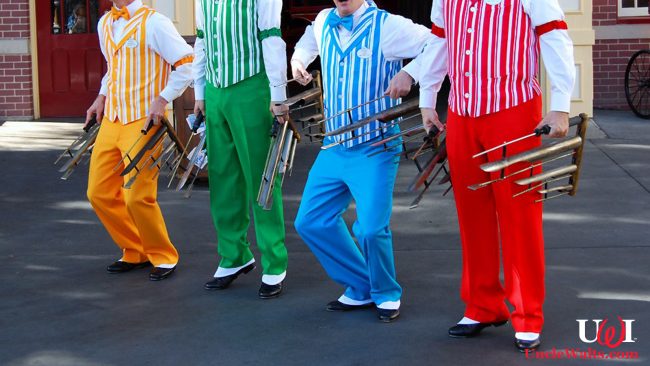 WALT DISNEY WORLD, FL — Emil Horton*, 28, has been singing with the Dapper Dans at the Magic Kingdom for almost eleven months. While Horton describes his role as “loads of fun” and “the job of a lifetime,” he tells Uncle Walt’s Insider that rookie “Dans” can be subjected to some rough treatment.

“It starts pretty subtly,” Horton shares. “The first week after training, I’m out performing on the street with the other three guys. Everything’s going great, we start singing ‘Coney Island Baby,’ and when we do the turnaround to the second verse, boom. The three veterans have modulated up a half-step, leaving me singing the old key.

“Of course the song quickly falls apart, and they yuck it up with the crowd, telling them I’m the new guy. Like it was my fault. Yeah, I laughed along with them — gotta keep up the ‘show’ — but I was pretty steamed inside.”

The hazing is not just musical in nature. For example, Horton had to keep his costume on for his first full month, whether on the job or not.

“Imagine pumping gas while dressed in a blue striped vest. Or going to church. Not to mention that trying to sleep with the hat on was absolute torture.”

Other sources tell Uncle Walt’s of more serious pranks. One Dan made the (as yet unconfirmed) accusation that another Cast Member put something in his water bottle that caused him to lose consciousness. When he came to, he was on a Festival of Fantasy parade float, traveling past Cinderella Castle — dressed as Stitch.

Horton doesn’t seemed too bothered by the pranking. “The joy and magic we create as Dapper Dans makes all the hazing worthwhile. Besides, in another month, I won’t be a rookie any more, and it’ll be my turn to take it out on the new guys.”

* Not his real name, which was changed to protect his identity. He’s actually named Monty, and he’s a bass singer from Winter Park. But we won’t tell you his last name.**
** It starts with a V.

How would you haze new Dapper Dans? Let us know in the comments below!

Cover photo of the Dapper Dans (we’re not showing their faces because they’re all shy) by Daniel Orth [CC BY-ND 2.0] via Flikr.

October 16, 2018 by Marty in Florida
© 2020 Uncle Walt's Insider. All rights reserved. All images used with permission. Unless otherwise attributed, all images licensed under Creative Commons CC0 license. This site is protected by reCAPTCHA and the Google Privacy Policy and Terms of Service apply.