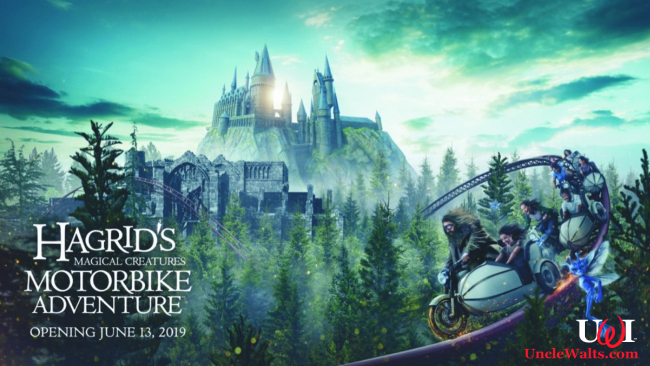 The concept art is a LIE.

ORLANDO, FL — As fans of the Fantastic Beasts movies and their seven prequels excitedly await the June arrival of the new attraction at Universal Orlando Resort and Spa, some bad news. The very namesake of “Hagrid’s Magical Creatures Motorbike Adventure” will not be able to enjoy his own ride.

“It’s not for a lack of trying,” says Universal (the company) spokesperson Junie Versal (no relation).

“We really wanted to be able to give Hagrid a sneak preview of his attraction. But trying to get him onto the motorbikes or into a sidecar was a fiasco. He means well, but he either wouldn’t begin to fit in the restraints, or things would break.”

What about making a custom, larger ride vehicle, we asked?

“We already gave it a shot,” replies Versal (no relation). “After all, plenty of modern park-goers aren’t much smaller than Hagrid these days. But the problem is, normal-size people would be using the bigger vehicle too, and we haven’t found a way to make it safe for everyone.

“We lost several good test dummies, and one not-so-bright engineer’s assistant, in testing it.”

For now, Hagrid is said to sit on a nearby bench, sobbing quietly in a dirty handkerchief as he watches the attraction’s test runs.

Would you be willing to fall off a roller coaster to make Hagrid happy? Comment below!

May 30, 2019 by Marty in Florida
© 2020 Uncle Walt's Insider. All rights reserved. All images used with permission. Unless otherwise attributed, all images licensed under Creative Commons CC0 license. This site is protected by reCAPTCHA and the Google Privacy Policy and Terms of Service apply.