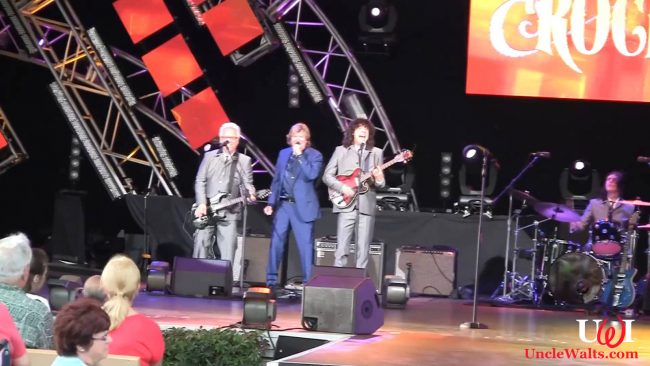 WALT DISNEY WORLD, FL — Following a recent “Garden Rocks” concert at Epcot Centre’s International Festivus of Pollen and Allergies [Ed.: I think that’s suppose to be “EPCOT’s International Flower and Garden Festival“], one irate guest went to Guest Relations to complain that the featured band had performed many of the same songs when he saw them last year.

Mr. Steven Tyler (no relation) of Falls Church, VA, attended the May 5 “Garden Rocks” concert at Walt Disney World’s Epcot Center, where he saw that evening’s featured performer, Herman’s Hermits. After the show, Mr. Tyler was reportedly outraged, and went to Guest Relations to voice a complaint. According to one anonymous message board member, who is believed to be an E.P.C.O.T. Guest Relations cast member, Mr. Tyler’s complaint was completely frivolous.

“He was upset that Herman’s Hermits started their show with ‘Something Good‘ and ended with ‘I’m Henry VIII I Am.’ He said that they shouldn’t have started and ended with those songs, because they did the same thing last year. And it was a completely bogus complaint. I’ve been working at Epcot for nine years, and every year, Herman’s Hermits have played here, they’ve opened and closed with the same songs. Mr. Tyler really has nothing to complain about. I managed to not laugh in his face, but it was difficult.”

Uncle Walt’s Insider spoke with Disney spokesperson Jun Disney (no relation), who said that the guest bands at the Epcot Resort & Spa are free to choose their own set list, and that Disney (the company) would not dictate what they should play. Disney (the spokesperson) added that most of the concert goers expect to hear a group’s hit songs, and in the case of Herman’s Hermits, “they’ve been performing so long, I’m surprised they can remember enough songs to consistently fill a 30 minute show.”

Are you Henry the Eighth? Let us know in the comments below!

May 8, 2018 by X in Florida
© 2020 Uncle Walt's Insider. All rights reserved. All images used with permission. Unless otherwise attributed, all images licensed under Creative Commons CC0 license. This site is protected by reCAPTCHA and the Google Privacy Policy and Terms of Service apply.