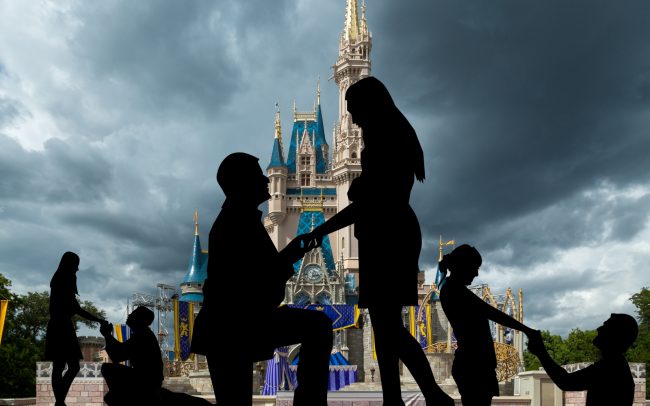 Quinton Murphy has been planning for months to pop the question to his college sweetheart, and he knew the perfect place for the proposal to happen: Walt Disney World. But when the time came, Murphy found that other couples were already taking up the “good places.”

New Orleans native Murphy, 23, is a grad student at Louisiana State University. It was as an undergrad there that he met his girlfriend Isabel Lockwood of Mesa, Arizona. The two have been dating “seriously” for three years, and when Murphy began considering marriage, he knew where the proposal had to happen.

“Being with Isabel has been like a storybook romance,” Murphy tells Uncle Walts Insider. “No, really. Like Beauty and the Beast. Or even The Princess and the Frog. What I’m trying to say is that I have an amazing girlfriend. Honestly, I don’t know how I’ve been so lucky to find someone like her, so I wanted to make the proposal something out of a fairy tale, too. So where better to propose than in front of Cinderella Castle.”

Murphy invited Lockwood to join his family on an early-December vacation to Florida, and then quietly arranged for her family and several of her friends to be there as well. The plan was for Murphy to drop to one knee in front of Cinderella Castle and propose, with his father filming the event. Then Lockwood’s family and friends, hiding nearby, would show themselves and celebrate with the newly-engaged couple together.

That isn’t how things have worked out.

“We got to Magic Kingdom on Saturday. It wasn’t too crowded, but as we approached the hub, I spotted a problem. There was a guy down on one knee in front of the Partners Statue proposing to his girlfriend. And as soon as they cleared out, another couple moved in and that guy proposed. Worse yet, it looked like there were five or six other potential couples kind of hovering nearby waiting their turn. So I bailed and went to find a different spot.

“Unfortunately, just about every other angle I could find with Cinderella Castle in the background had the same problem. There were proposals happening all over the place. And I still want it to be a surprise to Isabel, so I had to keep us moving around. All the while I’m looking for a good place to propose.”

So Murphy and Lockwood and his family continued their day in the park, with her family stealthily following along, Murphy trying to act like nothing was up but also continually searching for a good, photogenic proposal location. He kept finding other couples proposing places he considered good backups, such as in front of Splash Mountain or aboard the steamboat. The couple left the Magic Kingdom, still unengaged. A Sunday trip to Epcot was similarly unsuccessful.

Uncle Walt’s Insider reached out to Lockwood to see if the proposal was still a surprise. “Of course not,” she told us. “I mean, my family has been following us around for two days, hiding around corners. I’m not an idiot.”

Murphy is now considering proposing in front of the Christmas tree in the Pop Century Resort lobby, if there aren’t too many couples already in line.

December 4, 2017 by Marty in Florida
© 2020 Uncle Walt's Insider. All rights reserved. All images used with permission. Unless otherwise attributed, all images licensed under Creative Commons CC0 license. This site is protected by reCAPTCHA and the Google Privacy Policy and Terms of Service apply.