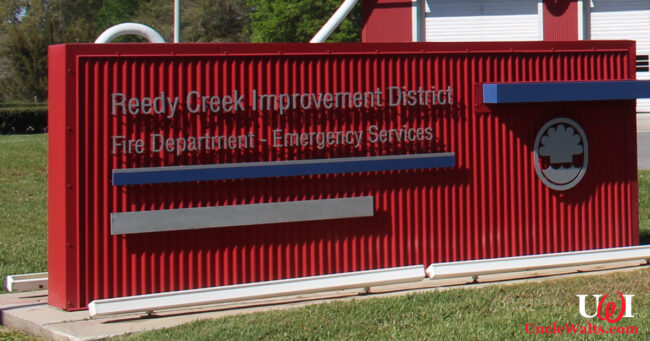 Lately its enforcers have even taken to wearing masks, so you know they’re up to no good.

The lawless area has been in place since the 1960’s, with its occupiers creating their own structures and “parks” within the Zone. They have actually built a fairly impressive infrastructure, but do not consider themselves subject to most state regulations.

Furthermore, several of the areas within the Zone are blocked off to outsiders. RCAZ occupiers (who call themselves “Cast Members”) have erected barricades, and only let outsiders pass upon paying an exorbitant “entrance fee.”

Uncle Walt’s Insider will keep you posted if and when this tyranny is brought to an end.

Have you ever shopped at the Reedy Creek Auto Zone? Let us know in the comments below!

Cover photo: One of the many barricades in the Reedy Creek Autonomous Zone. Photo by Michael Rivera [CC BY-SA 4.0] via Wikimedia.

August 14, 2020 by Marty in Florida
© 2020 Uncle Walt's Insider. All rights reserved. All images used with permission. Unless otherwise attributed, all images licensed under Creative Commons CC0 license. This site is protected by reCAPTCHA and the Google Privacy Policy and Terms of Service apply.