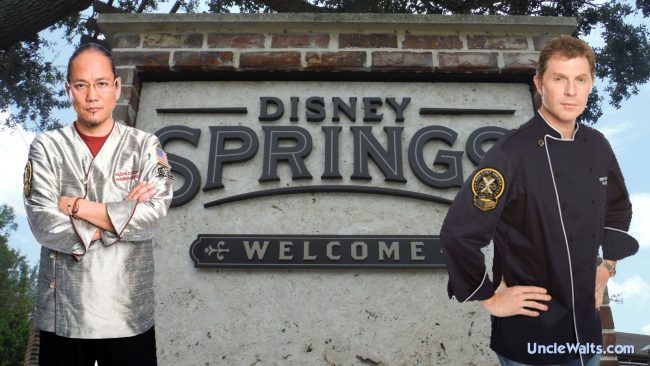 ‘Iron Chef’ Bobby Flay announced recently that he would be opening a new restaurant at Disney Springs. His yet-unnamed restaurant is scheduled to open in early 2019. The new restaurant will rekindle a decades-old battle with Iron Chefs Masaharu Morimoto and Wolfgang Puck.

The feud between Flay and Morimoto goes back to when they first battled each other on Iron Chef. Following the battle, Morimoto declared that Flay (is) “No chef … He stood on the cutting board. In Japan, the cutting board is sacred to us.” The two would go on to battle three more times on the show, each winning two and losing two matches.

And while Flay and Wolfgang Puck never competed in a head-to-head battle on the show, there is animosity there as well, with Puck flaunting his better overall win percentage. Puck famously agreed to appear on the Food Network show “Beat Bobby Flay,” but backed out when he discovered it did not involve actual beatings.

Flay’s recent announcement that he’ll be opening a restaurant at Disney Springs gives us a hint that the TV show may be over, but there’s as much animosity as ever among the Iron Chefs. “They offered me space at Downtown Disney in Anaheim, or at Disney Springs in Orlando. I chose Orlando so I could be close to those [guys]. I want to make them sweat. I want them to know I’m there!”

Flay’s specialty is American-inspired cuisine, while Morimoto focuses on Asian-fusion cuisine, and Puck describes his cooking style as a “French-Californian-Asian mixture.”

In addition to Morimoto and Puck’s restaurants at Disney Springs, other chefs affiliated with Iron Chef have had restaurants in the Orlando area. Iron Chef Cat Cora’s ‘Kouzzina’ closed at Disney’s Boardwalk in 2014, and Emeril Lagasse, who was invited to be on the show, has a restaurant at Universal’s Citywalk.

Via a spokesperson, Wolfgang Puck said that he was glad to see more Iron Chefs opening venues in Orlando. “I’m the best, of course, I’m the only one who won every match I entered on the show. I beat them on TV, I’ll beat them in the race for tourist dollars as well.”

Although no opening date has been announced, foodies are eagerly awaiting the new restaurant, and guests are eagerly anticipating yet another generic third-party dining experience. Uncle Walt’s will be there to bring you the full review!

February 26, 2018 by X in Florida
© 2020 Uncle Walt's Insider. All rights reserved. All images used with permission. Unless otherwise attributed, all images licensed under Creative Commons CC0 license. This site is protected by reCAPTCHA and the Google Privacy Policy and Terms of Service apply.