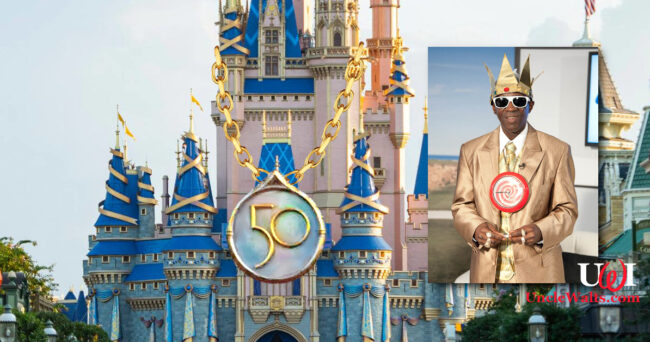 Personally, we don’t get the connection.

WALT DISNEY WORLD, FL — On the eve of the 50th Anniversary of the Walt Disney World Resort, Spa, & Gangsta Rap Hall of Fame, resort officials have announced that Flavor Flav, co-founder of rap pioneer group Public Enemy, will be an official Ambassador of the parks.

Disney (the company) spokespizzle Jun Disney (no relation) had this say: “That’s right, Flavor Flav is our official Ambassador. His signature look and style is copied on Cinderella Castle, complete with gold grills. And in lieu of a clock, we decided on the 50th anniversary decoration!”

When Uncle Walt’s Insider reached out to Flavor Flav’s respresnentative, we got back the expected response, “Yeah, boyeeeeeee!”

Rumor is Snoop Dog will be the official Ambassador of the smoking sections. Good idea or not?  Let us know in the comments below!

Cover photo: Seriously, what is the connection here? Photo © 2021 Disney; inset photo by Back9Network [CC BY 2.0] via Wikimedia Commons.

July 25, 2021 by Walt in Florida
© 2020 Uncle Walt's Insider. All rights reserved. All images used with permission. Unless otherwise attributed, all images licensed under Creative Commons CC0 license. This site is protected by reCAPTCHA and the Google Privacy Policy and Terms of Service apply.