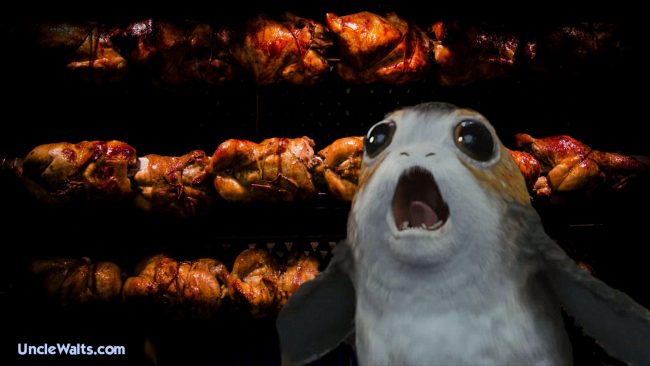 Disney tries to repeat the success of Pandora’s grilled Banshee in the new Star Wars area.

As workers at the Walt Disney World and Disneyland Resorts continue construction on Star Wars: Galaxy Edge, chefs in the Disney test kitchen are also hard at work constructing the menu that will offer out of this world delicacies. From “Aunt Beru’s Blue Milk” to “Porg on a stick” and more, Uncle Walt’s Insider was given an exclusive invitation into the kitchen to try these innovative and sustainable menu items.

From Walt’s love of homemade chili to their most famous invention, the churro, Disney has a long history of developing hot new food trends, the only exception being the Corn Dog, which was invented by the Fletcher Family in Dallas, TX and served at the State Fair of Texas. It was Walt’s brother, Roy, who visited the State Fair of Texas and brought back news of this tasty treat. After years of trial and error, Disney chefs finally created their own version of the corn dog that is still used today!

Having already created one alien menu in Animal Kingdom’s Pandora – The World of Avatar, Disney is on track now to take guests away to a galaxy far, far away. And a journey going that far will require tasty treats, and lots of them! Uncle Walt’s Insider recently went into the ultra secret Disney Test Kitchen to not only see, but to taste these new menu items. If you think getting into 1401 Flower Street [Ed.: The headquarters of Disney Imagineering in Glendale, California. Apparently they have a restaurant there?] is hard, try getting into the Test Kitchen!

Out of this world food fare

Armando Jenkins, the chef in charge of the Galaxy’s Edge menu, walked us through a few of the new items. Mr. Jenkins explained, “Our job here at the Disney Test Kitchen is to not only come up with new and innovative menu items, but also help the imagineers tell the story and create life long memories not only in the smell and taste, but also in how each menu item appears when we serve it to our guests.” 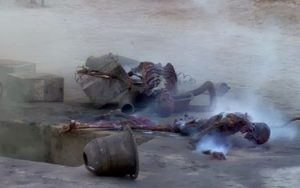 Mr. Jenkins took us on the journey through a few courses, starting off with Aunt Beru’s Blue Milk. As we sampled, Mr. Jenkin’s walked us through what we were tasting, “You’ll first notice that familiar color first seen in A New Hope. The Blue Milk is smooth, with a subtle hint of sweetness to it on the front end, and it takes a bit of a twist as you get a hint of smokiness on the finish.”

Next Mr. Jenkins brought out the appetizer portion, the Great Pit of Carkoon, and he shared the story of this dish, “This sharable appetizer was inspired by one of the most notorious creatures, the Sarlacc! Here we have a 5 cheese fondue, coming out of the cheese, or pit, are tender octopus tentacles that represent the Sarlacc. Surrounding the pit we have couscous to represent the sand that you would encounter where the Sarlacc buried itself. It is served with garlic toast points for dipping.” After sampling, we think you’ll enjoy digesting this dish for a millennia!

Next up was the main course, the soon to be famous Porg on a Stick. Like a proud father sharing his child with the world, Mr. Jenkins explained the dish, “This was inspired by the latest Star Wars release, The Last Jedi. We all laughed and cheered as Chewbacca roasted a couple of those annoying and ugly porgs. Little-known to the audience, the porgs were added to cover up puffins, actual Earth birds that live on the island where they filmed the scenes of the planet Ahch-To, where Luke Skywalker lives.”

As a waiter brought the dish, we were surprised at how accurate the dish looked to the one that Chewbacca was ready to tuck into on screen. As we took our first bite, Mr. Jenkins shared the secret behind this dish, “What you’re eating is an actual puffin, the exact animal that was covered up by porgs in The Last Jedi! We’ve roasted the puffin, err porg, over an open flame. It is basted with a new sauce we’ve created combining ketchup, apple cider vinegar, some light brown sugar, regular sugar, and spices. On the side is Padme’s Macaroni and Cheese.”

After enjoying the main course, Mr. Jenkins brought out not one but two dessert offerings. Like an athlete sharing a trophy, Mr. Jenkins shared the dishes, “These we are probably most proud of, as it really shows how innovative and forward thinking we are at the Imagineering of the food world, I give you Jabba the Hut and Outer Rim Asteroids.”

First we sampled the Jabba the Hut. This dessert comes in the shape of the original gangster, Jabba the Hut. It begins with an outer shell that is green in appearance, and which surprises you with its chocolate flavor. Inside we found a delightful and refreshing pineapple flavored soft serve.

The second dish, Outer Rim Asteroids, is a collection of round, fried bits of dough that are dusted with a cinnamon-sugar coating. A larger “asteroid” in the middle had a gummy worm coming out of a small crater chasing after a small wafer in the shape of the Millennium Falcon.

As we wrapped up with Mr. Jenkins, he shared some final thoughts, “At Disney we really like breaking new ground and we are not afraid of trying new things. We think that our guests will really enjoy our commitment to sustainable food sources, like the puffin. We also know our guests will enjoy what we’re literally bringing to the table. Anyone could stuff cream cheese into a pretzel, but it is a food gimmick that only attracts guests from those OTHER theme parks. We know our guests require sophistication, and that drives us to push that envelope, break those barriers, and keep moving forward!”

What do you think of these new food choices? Let us know in the comments below!

February 28, 2018 by Walt in California, Florida
© 2020 Uncle Walt's Insider. All rights reserved. All images used with permission. Unless otherwise attributed, all images licensed under Creative Commons CC0 license. This site is protected by reCAPTCHA and the Google Privacy Policy and Terms of Service apply.