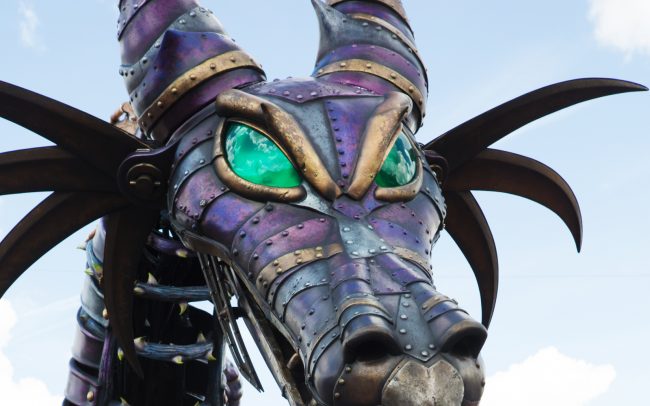 Chaos and calamity visited the Magic Kingdom on Tuesday — and no, those aren’t the names of previously unknown dwarfs — when the dragon in Disney’s Festival of Fantasy Parade escaped its handlers. Five guests and 12 cast members suffered minor burns, and one person was treated for “trampling,” before control of the dragon was regained.

A plus or a minus?

Disney Parks and Resorts are always striving to enhance guest experiences, and to that end try to make every new attraction or event bigger or better than those that had gone before. So when Disney’s Magic Kingdom Park announced in 2014 that a live fire-breathing dragon would be a part of its new Festival of Fantasy parade, fan sites were abuzz with excitement over the news.

Not all the reaction was positive, however. Amid the delight and anticipation, a few voices questioned the move for safety reasons. Had Disney gone too far this time?

Tragedy in the making

Disney ‘s Entertainment Division downplayed the risk, stating that the dragon was trained to stay on the parade route and that the cast members handling it were all professional handlers. In fact, most of those same cast members had been hired from Macy’s in New York City, where they had previously controlled the Snoopy balloon along the Macy’s Thanksgiving Day Parade route.

For over three years, the dragon’s inclusion in the Festival of Fantasy came off without incident. Crowds were dazzled at its appearance, and the dragon always breathed fire into the air (instead of guests), as it had been trained. But tragically, yesterday’s parade proved disastrous.

Cast member and dragon handler Chet Burroughs, who suffered second degree burns when the left sleeve of his polyester costume melted in one of the dragon’s blasts, spoke to Uncle Walt’s Insider.

“It was a stupid blunder that caused the escape,” Burroughs shared. “We have a safety checklist before every parade that has to be followed, and yesterday someone skipped a step. We had one idiot cast member who didn’t take his churro cart backstage. (I’m looking at you, STEVE.) Mal [the dragon] saw the cart, smelled the churros, and… well, when that happens, there’s just no controlling her.”

Churros, we asked? “Oh, yes,” he explained. “Dragons love churros. That scene in Harry Potter where Hagrid feeds a churro to Norbert? That’s one thing that film series got right.”

None of the injuries were life-threatening. Disney has not commented as to whether or when the dragon might rejoin the parade.

December 20, 2017 by Marty in Florida
© 2020 Uncle Walt's Insider. All rights reserved. All images used with permission. Unless otherwise attributed, all images licensed under Creative Commons CC0 license. This site is protected by reCAPTCHA and the Google Privacy Policy and Terms of Service apply.