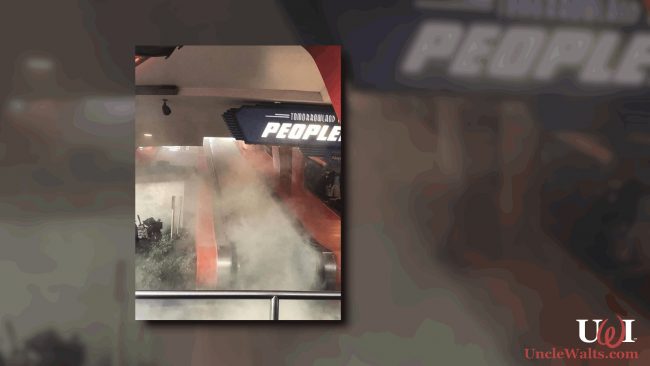 We invite you to <cough> sit back, relax, <cough> and enjoy your <cough> grand <cough> circle tour.

MAGIC KINGDOM, FL — A photo taken at the exit to the Tomorrowland Transit Authority shows what appears to be a fire, sparking a blaze of fiery internet comments earlier. Disney officials have not released an official cause, but an anonymous source [Ed.: Let’s leave Ted’s name out this time] tells Uncle Walt’s Insider that this was not a fire.

It was one guy vaping. 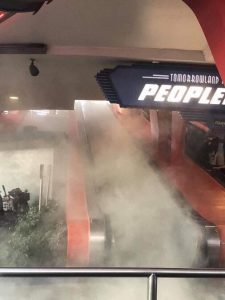 While the armchair quarterbacks at sites like Board X and Blog Y claimed to know what happened, they were all wrong. The white cloud of smoke turned out to be a single millennial with a vape stick. He was reportedly protesting the ban on smoking and vaping in the Disney parks, by doing a standard vape move known as the cloud-chase.

The cloud caused temporary closure of the Astro Orbiter and the Peoplemover, as well as evacuation of the Lunching Pad restaurant. Thankfully, nearby churro carts were not affected, as the Reedy Creek Fire Department arrived to form a protective ring around them.

Once the cloud was dispersed by a conveniently timed pop-up storm, everything was re-opened and returned to normal operations.

Nothing to see here? Or is this another Disney cover-up? Let us know in the comments below!

January 3, 2020 by Walt in Florida
© 2020 Uncle Walt's Insider. All rights reserved. All images used with permission. Unless otherwise attributed, all images licensed under Creative Commons CC0 license. This site is protected by reCAPTCHA and the Google Privacy Policy and Terms of Service apply.