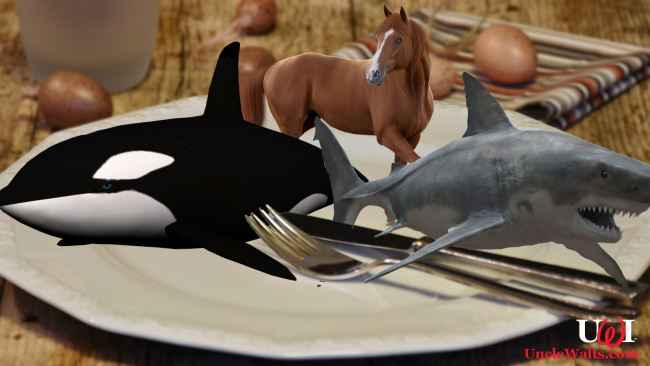 You won’t blubber or say neigh to the Great White dishes coming this year!

WALT DISNEY WORLD, FL — Each year dozens, maybe hundreds, of guests flock to Disney’s Epcot Resort, Spa, Hair Care & Tire Center to take part in the park’s second-most popular event, the Food and Wine Festival! Festival guests get to try new food offerings, learn from some of the best chefs TV has to offer, and test the limits of their bodies by drinking excessively in the Florida sun.

This year there are brand new offerings coming to your favorite food kiosk. As usual, Disney is once again playing it safe and shying away from any potential controversy. Our Uncle Walt’s Insider has the scoop on this year’s new food offerings.

Kæstur Hákarl (rotting shark meat) is a an Icelandic delicacy traced back to the days when Vikings ruled this tiny island nation. Guests will notice a pungent aroma that brings hints of rotten cheese coupled with the scent of ammonia. We found these small bites to just the perfect amount needed to really get the sense for what the Vikings had to do to survive. Kids, or adults who act like kids, will love watching the live demonstrations of native Icelanderites preparing this local cuisine.

Shark fin soup is a Chinese cuisine tradition. This dish is almost unknown amongst westerners, so it is perfect for Disney — it’s new and exciting, so guests spend more money! The soup is made using just the best part of the shark, the fin, which is cooked in a rich broth that provides all of the flavor, making the fin itself almost pointless. The rest of the shark is discarded into the sea to become a coral reef or something. [Ed.: Maybe the Icelanderarians get it out of the trash for their dish?] We’re not really sure what happens, but the soup is tasty!

Another dish that will certainly keep protesters away comes from Norway. Hvalbiff is a traditional Norwegian dish that is prepared with simple ingredients. We won’t give away the main ingredient here, but you’ll have a whale of a time eating it! Chefs prefer to just season the meat with salt and pepper, before cooking it in butter. Other spices can be used, and simple vegetables are served alongside, but the meat is the star of the dish. We found this dish to be quite delicious and left us wanting more! (Note: a portion of the proceeds from each sale of this dish is donated to Greenpeace.)

This year Japan will offer up four new dishes for guests to enjoy. Sakuraniku, Basahi, Baniku, and Bagushi will be offered as separate dishes, allowing guests to spend more money so they can try each one. This dish will send your taste buds off to the races, and came in a strong second as our favorite new dish. Get your spurs on and gallop over to the Japan pavilion to get yours!

Do you think Disney should stop playing it safe? Let us know in the comments below!

June 26, 2019 by Walt in Florida
© 2020 Uncle Walt's Insider. All rights reserved. All images used with permission. Unless otherwise attributed, all images licensed under Creative Commons CC0 license. This site is protected by reCAPTCHA and the Google Privacy Policy and Terms of Service apply.