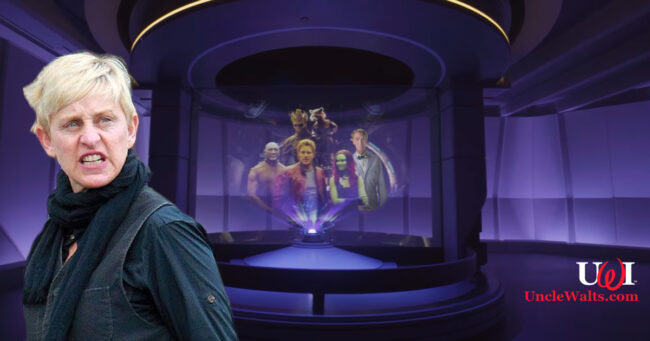 In homage to the recently departed Ellen’s Energy Adventure, there is a very momentary cameo in the new ride by none other than Bill Nye the Science Guy. Nye starred in the old attraction as a spirit guide, materializing in Ellen’s Dream to help her learn about energy.

Contrary to the popular rumor, Nye is NOT one of the Nova Corps officers visible in in the pre show of the new ride. However, those who are watching closely can see Nye appear at the end of the Guardians ride, flickering quickly into a hologram of Gamora, Groot, Rocket, Drax, and Star Lord before fading out just as quickly as he appeared.

Just like six of the dwarfs, someone’s not happy

The other stars of Ellen’s Energy Adventure, namely Jamie Lee Curtis, Alex Trebek, Ellen Degeneres, and the dinosaurs, are nowhere to be seen in the new ride.

(We have heard rumours that if you listen very closely in the queue, you can hear interim Jeopardy host Mayim Bialik mumbling in the background. Personally, our editorial staff would rather hear LeVar Burton or Ken Jennings, but that’s a bit beside the point.)

We reached out to one of Ellen’s staff, who said that Degeneres is reportedly upset to have not been included. However, the staff member confirmed that Ellen is very happy that “Stupid Judy” Jamie Lee Curtis was also not included.

Surely they could have put in a dinosaur, right? Let us know in the comments below!

May 17, 2022 by X in Florida
© 2020 Uncle Walt's Insider. All rights reserved. All images used with permission. Unless otherwise attributed, all images licensed under Creative Commons CC0 license. This site is protected by reCAPTCHA and the Google Privacy Policy and Terms of Service apply.