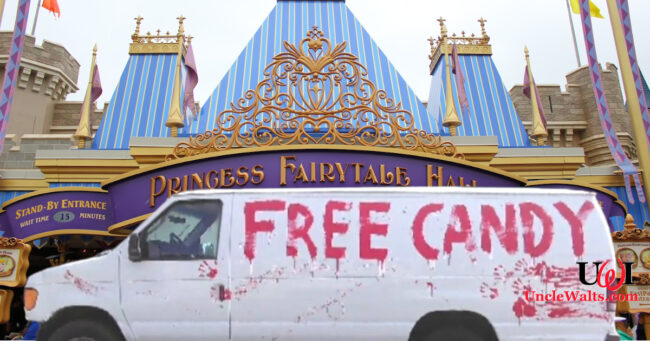 Of course you can still trust Disney with your kids!

ORANGE & OSCEOLA COUNTIES, FL — Good news for all of you Disney character lovers — in-person meet-and-greets are back!

Guests at the Walt Disney World and Disneyland Resorts, Spas, and LGBTetc. Awareness Centers will no longer have to be content with Mickey and Minnie waving at them from a balcony. Now your kids can meet all of those trustworthy Cast Members-in-costume up close and intimately!

A bit different than it was

For instance, allegedly, guests enter the meet-and-greet area through a sketchy van. Children of a certain age don’t just get to hug the characters, they get to sit on their laps! And finally, the kids are promised candy and a puppy if they exit through a certain door without their parents, never to be seen again. Allegedly.

We at Uncle Walt’s will keep you posted on these fun new changes!

Would the parents get a puppy too, we wonder? Let us know your thoughts in the comments below!

Cover photo: Would you climb into this van to go meet Mickey? Photo by ITM via Flickr & Reddit.

May 2, 2022 by Marty in California, Florida
© 2020 Uncle Walt's Insider. All rights reserved. All images used with permission. Unless otherwise attributed, all images licensed under Creative Commons CC0 license. This site is protected by reCAPTCHA and the Google Privacy Policy and Terms of Service apply.