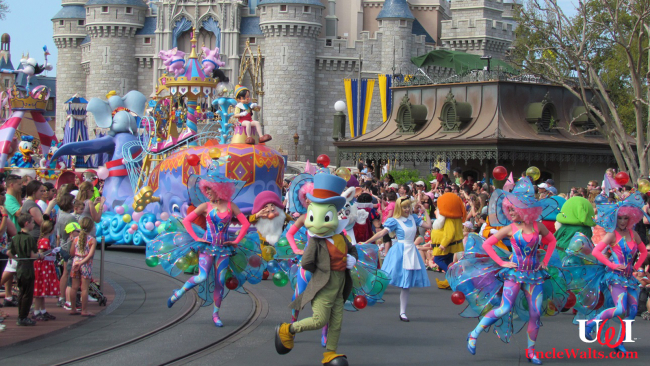 WALT DISNEY WORLD, FL — The popular Festival of Fantasy Parade at the Magic Kingdom typically passes through the entire park in under an hour. Yesterday it took 5 hours and 37 minutes.

“It was the weirdest thing,” Averill Godfrey, 26, of McComb, MS, tells Uncle Walt’s Insider. “My boyfriend and I were camped out in the hub, watching the parade pass. But it never finished.”

“I’d seen the parade before — it’s a favorite,” Godfrey shares. “But right after Mickey and Minnie passed by in the hot air balloon, which usually ends the parade, here came Beauty and the Beast again [Ed.: the first float in the parade].”

The Festival of Fantasy parade was apparently stuck in a loop, with the first float being sent back onstage following the last. Godfrey was confused, but stayed put.

“We stood there for a couple of hours, and saw the complete parade about five times before we left to go ride stuff. We were in Tomorrowland for a while, and even ate supper. When we got back to the hub, after dark, the parade was still going on.”

Magic Kingdom officials confirm that the parade ran continuously for almost six hours on Sunday. They blame two unnamed Cast Members who kept sending the parade performers back through the gate into Frontierland as a prank.

The same officials say that those Cast Members have been “dealt with.”

What do you think happened to them? Let us know in the comments below!

January 14, 2019 by Marty in Florida
© 2020 Uncle Walt's Insider. All rights reserved. All images used with permission. Unless otherwise attributed, all images licensed under Creative Commons CC0 license. This site is protected by reCAPTCHA and the Google Privacy Policy and Terms of Service apply.