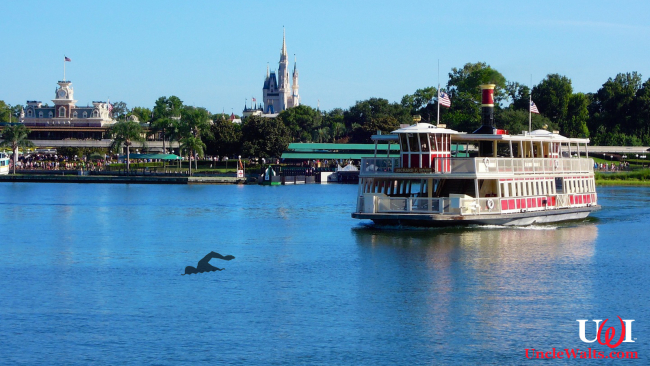 He was finally able to leave Seven Seas Lagoon when the dust wore off.

WALT DISNEY WORLD, FL — “He normally doesn’t even like swimming.”

That’s the word from Megan Boyce, 33, of Asheville, NC, after her husband Roger spent most of Friday ferrying guests back and forth across Seven Seas Lagoon — one at a time, on his back. Apparently a mislabeled container at the Magic Kingdom led to Roger being sprinkled with ferry dust, not fairy dust.

“Straight for the water”

“I didn’t see it happen,” Megan explains, “but I’m told a Cast Member tossed a handful of what he thought was fairy dust into the air on Main Street, and Roger walked right into it. I just know that, all of a sudden, Roger stops and says to me, ‘I have a job to do.’ And then he turns and marches back under the train station and out of the park. And then heads straight for the water and dives in.”

Megan had her hands full.

“All this time I’m pushing our girls in a double stroller, so I’m struggling to keep up. By the time I get to the edge of the [Ed.: Seven Seas] Lagoon, Roger is halfway across, swimming to the Transportation and Ticket Center.”

After getting the attention of park security and First Aid personnel, Megan was advised just to let the ferry dust wear off before attempting to get Roger out of the water. In the meantime, the mislabeled box of dust was discovered and removed from the park.

“We did eventually get him out,” says Megan, “twelve hours later. He was tired, but happy.”

UPDATE: Megan notified us as the story was going to press that Roger now insists his name is “Joe Fowler.” Hopefully this is a temporary side effect.

Have you been sprinkled by ferry dust? Let us know in the comments below!

February 21, 2019 by Marty in Florida
© 2020 Uncle Walt's Insider. All rights reserved. All images used with permission. Unless otherwise attributed, all images licensed under Creative Commons CC0 license. This site is protected by reCAPTCHA and the Google Privacy Policy and Terms of Service apply.