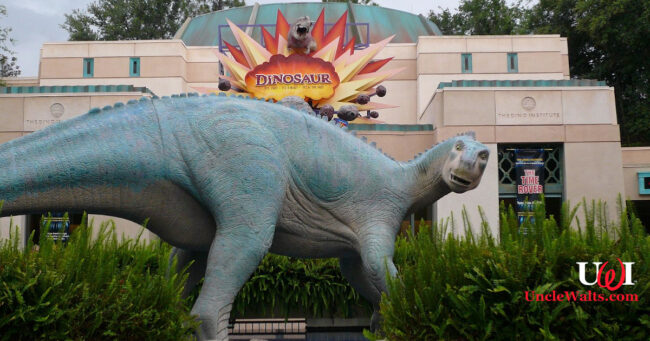 Just more bad news for Disney out of Florida.

DINOLAND, USA — In what is believed to be a first [Ed.: A first for Disney? A first for animatronic figures? A first for dinosaurs? We need details, people.], the animatronic Carnotauruses from the Dinosaur! ride at Disney’s Animal Kingdom Theme Park and Spa have voted to unionize. The union vote was held last week, and passed by a surprisingly large majority.

Dinosaur (the creatures) spokesperson and interpreter Jun Dino (no relation) said that the carnivorous animatronics were “fed up” with being slandered and were unhappy with their working conditions. Dino (no relation) stated that the dinosaurs would now be represented by the International Alliance of Theatrical Stage Employees (IATSE).

“The Carnotauruseses are a proud species,” Dino (no relation) shared, “and they feel that they’ve put up with inhospitable working conditions for far too long. Every time that Dr. Seeker steals a time rover and sees one of us, it’s always, ‘Definitely not our dino!’ He doesn’t seem to realize how hurtful his words can be.”

The editorial staff of Uncle Walt’s Insider searched, but could not find previous evidence of a group of unionized audio animatronic characters. [Ed.: Thank you.]

When asked why the Carnotauruses chose IATSE, Dino (no relation) simply said, “Because the Teamsters thought it was a joke.”

Dr. Seeker was unavailable for comment. According to his publicist, he is currently “at the scene” in Las Vegas.

What do you think? Is the idea of animatronics unionizing a joke? Let us know in the comments below!

Cover photo: The Iguanodon, or as the other dinos call it, the “Scab-osaurus.” Photo by Michael Gray [CC BY-SA 2.0] via Flickr.

May 23, 2022 by X in Florida
© 2020 Uncle Walt's Insider. All rights reserved. All images used with permission. Unless otherwise attributed, all images licensed under Creative Commons CC0 license. This site is protected by reCAPTCHA and the Google Privacy Policy and Terms of Service apply.