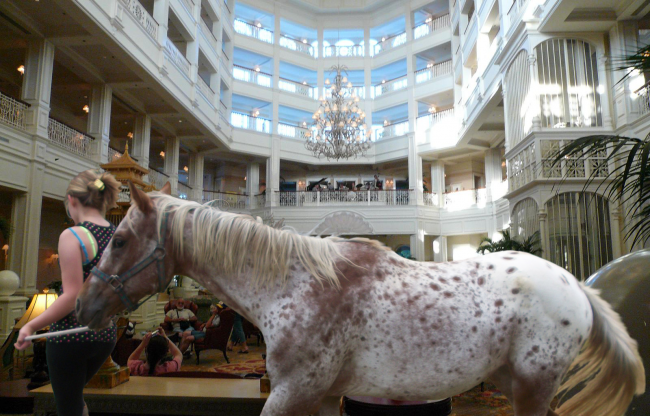 The Walt Disney Company startled its fans earlier this month when it announced that guests at select Walt Disney World resorts would be able to keep dogs in resort hotel rooms, beginning on October 15th. Uncle Walt’s Insider has learned that the policy is actually broader than announced, and also includes many other animals, up to and including horses.

Even when the policy was thought to only include dogs, it received mixed reactions, with guests arguing on both sides of the issue.

Uncle Walt’s Insider wanted to find out more, so we asked some random people who were out shopping at Disney Springs. Wisław Kruger, 47, of Celebration, FL was happy to hear this news. Mr. Kruger said, “As a dog breeder, I often find myself feeling guilty at leaving the <female dog> back at the compound.” He continued, “Now I can bring the <female dog> to a select Walt Disney World Resort, and if she starts to give birth, extra towels are just a phone call away!”

Juanita Daviau, 22, of New York City, NY, was not as happy. Between sips of her Starbuck’s Pumpkin Spice Latte and checking her Snapchat, she had this to say, “I come to Walt Disney World using Daddy’s credit card to get away from the stress I have at home. Like, my Mom wants me to find a job, okay? And how does Disney expect me to be able to stay up for more hours of rides and magic if I can’t sleep till three in the afternoon like I do at home, because someone just had to bring their dog with them? It’s annoying enough with that maid lady knocking on the door yelling housekeeping. It’s a HOTEL, lady, not a house!”

We asked our favorite Walt Disney Spokesperson, Jun Disney (no relation), about this recent announcement. Ms. Disney (no relation) was extremely excited about this change, “Guests can now bring ALL members of their family to select Walt Disney World Resorts, and not have to worry if their pet is getting enough food, water, and attention! And because our guests have asked, we are proud to announce an expansion to this new policy!” Ms. Disney (no relation) continued. “Recent guest surveys done at the Baker County Fair in Macclenny, FL, showed us that guests care about more than just their dogs. Horses are a big part of their lives, so we wanted to be sensitive to that and allow them as well.”

Notably absent from that list? Cats. We asked Ms. Disney (no relation) if Disney (the company) would be allowing cats into the hotel rooms. “Oh, no. No. Never!” Ms. Disney (no relation) said. “Cats… are just evil. We’ve watched thousands of cat videos on the Internet have shown just how destructive domesticated cats can be. We prefer our cats to be in their natural state, out of sight, hiding in the bushes and shadows of the parks. Their job is to deal with the rat and mice population. We’ll leave guest happiness to Mickey and Minnie!”

October 19, 2017 by Walt in Florida
© 2020 Uncle Walt's Insider. All rights reserved. All images used with permission. Unless otherwise attributed, all images licensed under Creative Commons CC0 license. This site is protected by reCAPTCHA and the Google Privacy Policy and Terms of Service apply.