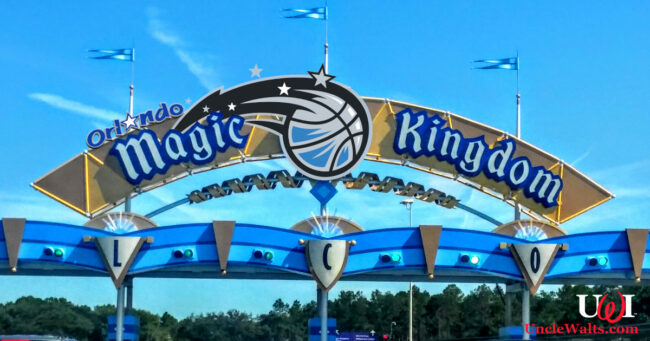 Nothing like a sponsor to make up for lost profits.

AMWAY CENTER, FL — Amid financial losses and decreased attendance, The Walt Disney Company has turned to corporate sponsorship to make up some of the shortfall.

Corporate sponsorship, of course, is nothing new to Disney. However, for the first time ever, an entire park will be sponsored. Disney has announced that Walt Disney World’s Magic Kingdom will now be known as “The Orlando Magic Kingdom.”

Uncle Walt’s Insider was [Ed.: the only media source] in attendance at a joint press conference held by Orlando Magic spokesperson Jun DeVos (relation), and Disney (the company) spokesperson Jun Disney (no relation). DeVos [Ed.: Yes, part of the same family that brought you Amway, the Grand Rapids Griffins, and a Secretary of Education who’s never actually worked in education] started with a prepared statement:

“The NBA and the Walt Disney Company have had a long and productive relationship. [Ed.: By our count, 2 years.] The NBA has licensed it’s name for the NBA City restaurant at Citywalk, and has recently paid to use the famed Disney Bubble to host our playoffs. We think that this new extension of our continuing partnership will bring great things for everyone involved.”

“Hoping for something better”

Disney (the company) spokesperson Disney (no relation) added, “Walt Disney World has long been a top tourist destination. We thought that it would be a great thing if we could sell the naming rights to an entire theme park.

“I have to admit, we were hoping for something a little better. Maybe ‘The Magic Castle Kingdom’ or ‘Magic Johnson’s Kingdom’. But I guess we’ll settle for being named after a mediocre NBA team.

“It could be worse. We could be ‘The Magic Kingdom, presented by David Blaine’!”

Which park should get a sponsor next, and what should the new name be? Let us know in the comments below!

October 9, 2020 by X in Florida
© 2020 Uncle Walt's Insider. All rights reserved. All images used with permission. Unless otherwise attributed, all images licensed under Creative Commons CC0 license. This site is protected by reCAPTCHA and the Google Privacy Policy and Terms of Service apply.