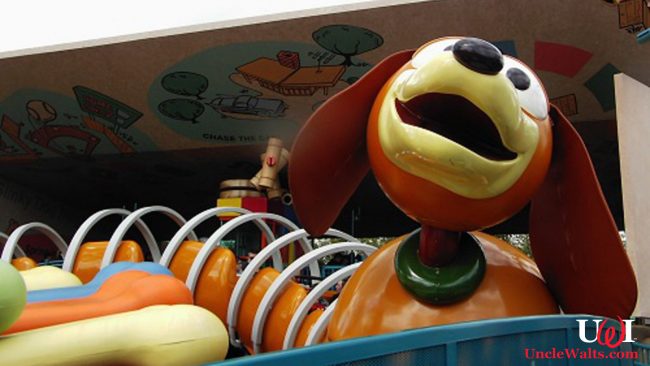 There are some big surprises in store on Slinky Dog Dash!

WALT DISNEY WORLD, FL — This may be the biggest scoop in the 68-year history of Uncle Walt’s Insider! We were able to sneak one of our interns onto a test run on the new Slinky Dog Dash roller coaster in the currently unopened Toy Story Land at Disney’s Hollywood Studios, and the ride is NOT what you’d expect from Disney. Read on for all the juicy details!

The ride starts gently enough, but soon REDACTED, with REDACTED. Woody then REDACTED his REDACTED, while Wheezy REDACTED Jessie! I know, right?

And all that’s just before the REDACTED Rex REDACTED Green Army Men. Your Slinky Dog car REDACTED and REDACTED, while REDACTED like a rock! [Ed.: Oh, like a rock!]

Then comes the biggest surprise of all — each REDACTED CHURROS! And just when the REDACTED, suddenly REDACTED Star Lord REDACTED with a goat REDACTED Dumbledore!!!!

Please like and share this article with as many friends as possible, because once Disney finds out this information is out there, who knows what they’ll do to stop it from spreading! [Ed.: Too late — somehow they found out.]

What REDACTED? Let us know in the comments below!

June 19, 2018 by Marty in Florida
© 2020 Uncle Walt's Insider. All rights reserved. All images used with permission. Unless otherwise attributed, all images licensed under Creative Commons CC0 license. This site is protected by reCAPTCHA and the Google Privacy Policy and Terms of Service apply.